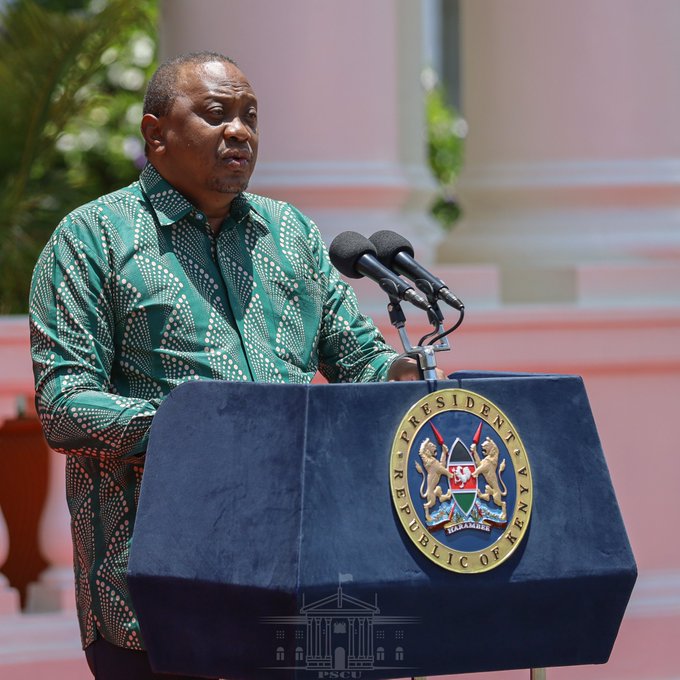 President Uhuru Kenyatta and his deputy William Ruto will take an 80% pay cut as they fight to curb the spread of Covid-19 pandemic in Kenya.

The information was made public by Uhuru who said: “My government has offered a voluntary salary reduction to senior government officials”.

Also, Cabinet Secretaries will take a 30 per cent pay cut, as will Chief Administrative Secretaries. Uhuru has also directed the Treasury to offer 100 per cent tax relief for persons earning a gross income of Sh24000. Pay As You Earn (PAYE) tax will also be reduced from 30 per cent to 25.

“There will be a reduction of the income tax rate from its maximum of 30 to 25 per cent,” he said.

These recommendations are subject to approval.

Uhuru recommended a reduction of corporation tax from 30 per cent to 25 per cent.

“There will also be a reduction of the turnover tax rate from three per cent to one percent,” he said.

Uhuru also suspended the listing on CRB of any persons in micro small or medium enterprises whose loan accounts were due or in arrears, effective April 1.

“..this is to protect jobs for our people and uncertainty for employers..” he said.

Addressing the nation on Wednesday from the State House, Nairobi, the President asked Kenyans to join hands with the government to fight the pandemic.

The President said that Sh1 billion from the Universal Health kitty will be directed to recruit more health officers to mitigate the spread of the virus.

The Head of State has further ordered 100 per cent tax relief to Kenyans earning less than Sh24,000.

He also ordered the reduction of the turn over tax rate for Micro and Small Media Enterprises to one per cent from the current three per cent.