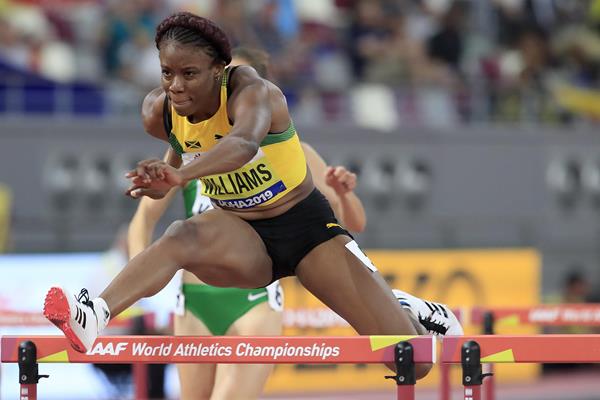 Jamaican athlete and the 2015 World Champion in the 100m hurdles, Danielle Williams, clocked a personal best 7.86 seconds to win the final of the women’s 60m hurdles at the fourth and final leg of the American Track League in Fayetteville, Arkansas on Sunday.

Williams, who was competing in the event for the third time this season, was the fastest qualifier after winning her heat in 7.90s as main rival Tonea Marshall, of the United States, finished second in 7.89s, and Great Britain’s Cindy Sember was third in 8.01 seconds. There was some concern for Williams after the race, as she was taken off the track with an injury.

“It was a poor start for me as I was a bit nervous, as this was the first time this season I was racing with professionals,” she said. “I am happy to be back competing this season after missing a year of competition, as I love to compete.”

Chrisann Gordon, a member of Jamaica’s gold medal winning women’s 4x400m relay team at the World Athletics Championships in 2015, finished second in the women’s 400m in 52.06s, on her indoor debut for the season. The United States’ Shamier Little won in a personal best 50.57s, as Mexico’s Paola Morán took third in a personal best 52.78s.

Published in Entertainment, Oceania & the Caribbean and Sports