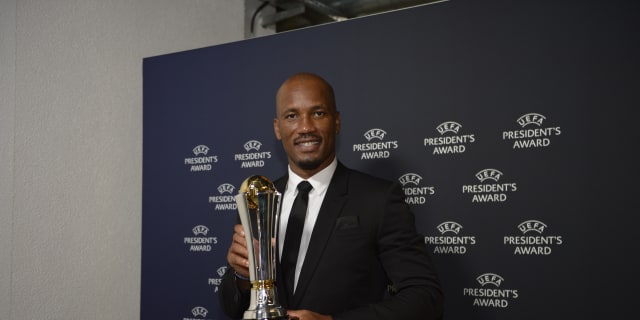 Former Ivory Coast captain and Chelsea star Didier Drogba has been awarded with the UEFA President’s award, expressing his delight after he was honoured with the individual accolade.

The former Chelsea and Ivory Coast striker was hailed as a “pioneer” by UEFA president Aleksander Ceferin.

“Didier is a hero to millions of football fans for his achievements throughout his glittering playing career,” Ceferin said via a UEFA statement.

“I will remember him as a player for his skill, strength and intelligence, but above all for his insatiable appetite to succeed – a trait which is just as present in his desire to help others off the field of play.”

Drogba arguably had a successful career at Chelsea, scoring 164 goals in 381 appearances in all competition, capping it up with a dramatic Champions League win in 2012, which he personally masterminded after equalizing at the dying minute and scoring the winning goal during a penalty shoot-out against Bayern Munich.

‘I think it’s one of the best moments in my career, if not the best,’ said Drogba. ‘I had a manager when I was in Le Mans who told me “you don’t need to play 90 minutes, 10 minutes is enough for you to make the difference”. At first I was frustrated but I learned how to use those 10 minutes and be efficient. So all those goals in the last minutes, I think is also because of this lesson.’

Drogba retired in 2018 after a final season with Phoenix Rising. He has been running a charitable foundation that has helped to build schools for disadvantaged children.

He has also been studying for UEFA’s Executive Master for International Players (MIP) programme.

“To have won a Champions League, to have played and scored for my country at a World Cup – these are things I could only have dreamed of when I was a child,” Drogba said.

It was also a landmark moment in Geneva as Drogba became the first African to receive the UEFA President’s Award, which recognises inspirational figures who have had a huge impact on the sport on and off the pitch.