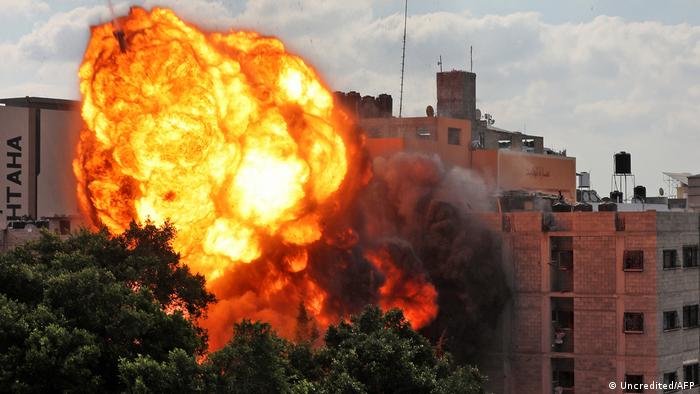 The Israeli Defense Forces carried out airstrikes Wednesday morning to Gaza Strip, saying it was a response to incendiary balloons that Palestinian militants launched into Israel.

There have been no reports of any casualties. The Israel Defense Forces said in a statement that the Hamas compounds were used by members planning attacks, and the militant group is “responsible for all events transpiring in the Gaza Strip, and will bear the consequences for its actions.” Additionally, the Israeli military is “prepared for any scenario, including a resumption of hostilities.”

Tuesday’s conflict was sparked by a march in East Jerusalem. Hundreds of Israeli ultra-nationalists paraded through the Old City, celebrating Israel’s capture of East Jerusalem in 1967. Many were waving flags and singing religious songs, and some shouted, “Death to Arabs!” and “May your village burn!”

Hamas told Palestinians they should show “valiant resistance” to the march and “rise up in the face of the occupier and resist it by all means to stop its crimes and arrogance.” The incendiary balloons that were launched into Israel started at least 10 fires in the southern part of the country, The Associated Press reports.

Israeli Foreign Minister Yair Lapid tweeted that those wishing death to Arabs are “a disgrace to the Israeli people,” adding, “the fact that there are radicals for whom the Israeli flag represents hatred and racism is abominable and unforgivable.”

Last month, Israel and Hamas reached a cease-fire agreement after nearly two weeks of violence between both sides left more than 240 people in Gaza and 12 people in Israel dead.

Meanwhile, after 12 years of power, Benjamin Netanyahu was replaced this week by Naftali Bennett as Israel’s Prime Minister.