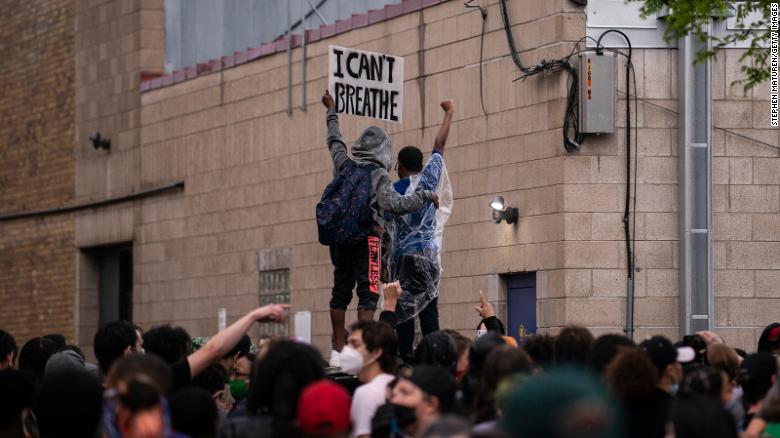 Hundreds have taken over the streets of Minneapolis, many gathering at the intersection where Floyd was pinned to the ground by police officers shortly before he died to protest his death.

According to CNN, the protesters want the officers involved to be prosecuted for the death of Floyd.

Recall that Floyd was arrested Monday evening after officers responded to a call about an alleged forgery in progress. Video from bystanders shows Floyd handcuffed and pinned to the ground and one police officer’s knee pressing against his neck. Floyd pleaded he was in pain and couldn’t breathe.

Shortly after, he was declared dead at a nearby hospital. Four police officers involved in the incident were fired Tuesday, Minneapolis police said.

Tuesday evening, protests started at the intersection where Floyd was arrested. Protesters later moved to one of the police precincts, CNN affiliate WCCO reported. Some demonstrators chanted “No justice, no peace” — as well as “I can’t breathe,” which were some of the last words Floyd uttered Monday in the bystander video.

Demonstrators and officers in riot gear faced each other as police sent tear gas canisters into crowds.
“We’re here to let them know this can’t be tolerated, there will be severe consequences if they continue to kill us. This will not go on another day,” a protester told the affiliate.

Police used tear gas to disperse a crowd after some protesters turned unruly, Minneapolis police spokesman John Elder told CNN. Some demonstrators wheeled a shopping cart full of rocks just outside the precinct and dumped the rocks on the ground for people to throw, a CNN team there reported. A police cruiser’s back window was shattered when someone threw something at it.
Police outside Minneapolis Police Department’s 3rd Precinct fired what appeared to CNN’s team on the scene to be non-lethal projectiles at demonstrators.

Officers fired “foam marking rounds,” but no rubber bullets, after some protesters became unruly, Elder said. Those rounds are meant to mark individuals that officers believe may be instigating violence for later investigation, Elder said.

No charges in the case have been filed. Members of Floyd’s family say they want four officers at the scene charged with murder.

Brown and Floyd’s two brothers held up his picture during Tuesday’s interview and spoke of a man who “didn’t hurt anybody” and who they described as a “gentle giant.”

“Knowing my brother is to love my brother,” Philonise Floyd said. “They could have tased him; they could have maced him. Instead, they put their knee in his neck and just sat on him and then carried on.”

“They treated him worse than they treat animals,” he said.

“They need to be charged with murder because what they did was murder,” Brown said. “And almost the whole world has witnessed that because somebody was gracious enough to record it.”

“They need to pay for what they did,” she said.