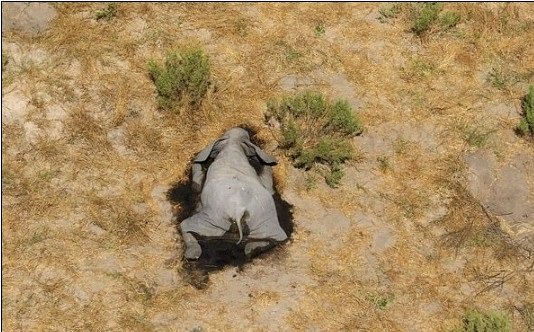 A disaster has happened in the African country of Bostwana after over 350 elephants mysteriously dropped dead. Environmentalists have described it as a ‘conservation disaster’.

An aerial view showed the carcasses of the over 350 elephants that died from unknown causes scattered across the Okavango Delta and other northern parts of the country.

The first unusual deaths were reported in May when 169 elephants died in a short period at the Okavango Delta, a marshy and lush wildlife habitat.

That number had almost doubled by mid June, with 70 per cent of the deaths occurring around waterholes, according to local sources.

Botswana’s government has not yet tested the animal’s bodies for traces of poison or pathogens, however Anthrax has been ruled out – Cyanide poisoning has previously been used by poachers in Zimbabwe.