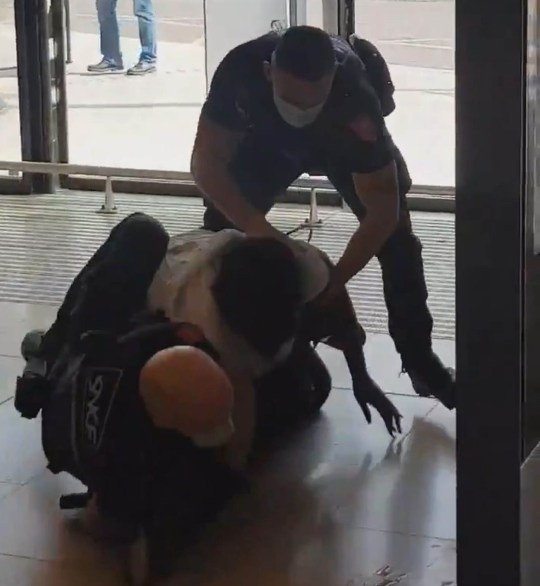 A heavily pregnant black woman has been seen screaming as she is pinned to the floor by railway police in the outskirts of Paris.

In the horrifying video, the pregnant black woman identified as Diatou could be seen saying ‘Don’t push me’ as one of the agents shoves her and tries to move her backwards across the station.

Suddenly she is tackled by several guards and cries out in pain as she is held down on her stomach. Her partner begs them to leave her alone and tells them she is pregnant, but as he tries to intervene he is stopped by two other security agents from SNCF, France’s national state-owned railway company.

According to Metro UK, the 23-year-old woman screams as the struggle continues, aiming a kick at the guard who pushed her, who by this point is putting handcuffs on her. An unidentified man who filmed the video can be heard telling agents: ‘She is pregnant! She is pregnant! I swear to God, you are messing up! She is pregnant!’

The video of the incident at Aulnay-sous-Bois, in the north-eastern suburbs of the French capital, has caused outrage on social media and has had well over 1.2 million views. A caption on the original clip said: ‘I have just filmed SNCF agents assaulting a pregnant woman… bunch of racists (Aulnay-sous-Bois). But the SNCF has defended its employees and claims the video does not show the full story.

It says the pregnant woman, had refused to wear a mask, and had spat at and bitten the agents. The company said the guards only acted the way they did after telling her three times to leave the station. Three SNCF agents have filed a complaint over the incident. The woman, named Diatou, was taken to hospital where doctors confirmed she was seven months pregnant.

She then spent seven hours in detention before being released on bail under judicial supervision. The condition of her unborn child still remains unclear. Her partner was reportedly placed in police custody for ‘contempt and violence’.

Diatou has reportedly also filed a complaint with the authorities. Speaking after last week’s incident, she told local media: ‘Every time I see this footage, I have to cry. I see the images in my head.’ Claiming she did nothing to provoke the agents’ behaviour from the agents, she added: ‘I did not insult them, I did not hit them, I don’t understand why they tackled me to the floor.’