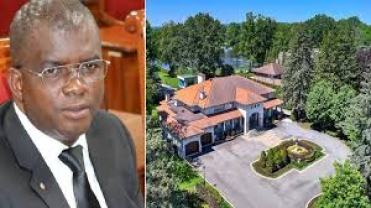 As a neo-Duvalierist regime becomes ever more dictatorial it’s also worth revisiting Canada’s history in facilitating fraud and money laundering in the hemisphere’s most impoverished nation.

Recently La Presse reported that the wife of a governing party senator, who works at the Haitian consulate in Montréal, purchased a mansion in Laval. The story reported, “as the political crisis bogs down in Haiti, the wife of a senator belonging to the party of the contested president, Jovenel Moïse, has just bought a sumptuous $ 4.25 million villa in Laval, attracting a flood of criticism from Montreal to Port-au-Prince. The new property was paid off in full in one fell swoop, without a mortgage, and without their other house being sold, according to the Land Registry.” Two follow-up Journal de Montréal stories found that Senator Rony Célestin and his spouse, Marie-Louisa Célestin, spent $2 million more recently on property and businesses in the Montréal area.

La Presse’s Vincent Larouche should be praised for covering a story that had been circulating in Montréal’s Haitian community for days. But, a lot of important context is missing from the story, as Larouche must know. (15 years ago, Larouche wrote a nice review of my co-authored book on Canada’s role in the 2004 coup when he was with left-wing L’autre Journal). Senator Célestin was implicated in the 2019 killing of journalist Néhémie Joseph and threats targeting the Director General of the Anti-Corruption Unit. More broadly, Célestin’s political party was founded by corrupt and violent Duvalierist Michel Martelly.

But the broader Canadian angle is the most important omission. On Facebook, activist Jean “Jafrikayiti” Saint-Vil explained: “The PHTK regime headed by Michel Martelly and his self-described ‘bandi legal’ (legal bandits), came to power thanks to fraudulent elections organized, financed and controlled by the foreign occupation force established in Haiti since the coup d’état of February 2004. The planning meeting for the coup d’etat and putting Haiti under trusteeship was organized by Canadian Minister for La Francophonie Denis Paradis. The Ottawa Initiative on Haiti [January 31-February 1, 2003] succeeded in overthrowing the legitimate President as well as 7,000 elected officials from the region’s most impoverished country. The elected officials were replaced by bandits such as ‘Senator’ Rony Célestin of whom this article speaks.”

In a follow-up post Saint-Vil offers an alternative way of understanding Canada’s relationship to political corruption in Haiti. He asks, “Can you imagine [Hells Angels leader] Maurice ‘Mom’ Boucher and [serial killer] Carla Homolka installed as Senators in Canada by fraudulent elections led by a coalition of Haitian, Jamaican, Ethiopian diplomats in Ottawa?”

Few Canadians would be happy with such an outcome. But it’s a troublingly apt description of US, Canadian and French policy in Haiti.

This is not the first time Canada has been implicated in Duvalierist corruption. Before fleeing to the French Riviera, Jean-Claude ‘Baby Doc’ Duvalier emptied government bank accounts. The Royal Bank of Canada and other Canadian financial institutions assisted the young dictator’s theft. A US auditing firm hired to investigate and track down public funds concluded that Duvalier’s financial advisors “had set up an intricately concealed flow of money through a bevy of banks and accounts, most of them Canadian.”

The Royal Bank of Canada branch in Haiti assisted Duvalier. So did a Toronto branch of the bank. In Money on the Run: Canada and How the World’s Dirty Profits Are Laundered, Mario Possamai details Duvalier’s turn to Canadian institutions when Swiss banks froze Baby Doc’s accounts. At a Royal Bank branch in Toronto his attorneys converted $41.8 million in Canadian treasury bills, a highly secretive and respected form of money. Once converted, the Duvaliers’ assets could no longer be scrutinized.

In Canada: A New Tax Haven: How the Country That Shaped Caribbean Tax Havens Is Becoming One Itself Alain Deneault summarizes: “The dictator’s money was moved from Canada to Jersey [tax haven] where it was received by the Royal Trust Bank, a subsidiary of Canada’s Royal Trust Company. The deposit was made to an account that was part of a larger account held by the Manufacturers Hanover Bank of Canada, a financial institution with its headquarters in Toronto a few steps away from the Royal Bank of Canada where the whole operation had been set in motion. The operation became more complex with securities being split from their ownership records and further movements between the Hong Kong and Shanghai Bank in Jersey, the Royal Bank of Canada in London, the Banque Nationale de Paris, and sundry Swiss institutions.”

Despite guidelines requiring banks to determine customers’ identity, RBC admitted it simply trusted Duvalier’s lawyers. Bank officials later claimed they would have refused the transaction had they known who the beneficiaries were.

This explanation is hard to believe. The only foreign bank in the country for a number of years, the Royal Bank financed projects by the Duvalier regime. Amidst the uprising against Jean-Claude Duvalier, Royal’s senior account manager in Port au Prince, Yves Bourjolly, joined a long list of prominent businessmen who signed a statement expressing “confidence in the desire of the government for peace, dialogue and democratization … at a time when order and security appear to be threatened.”

Over the years Canada has empowered many other corrupt and violent politicians in Haiti. In response to the Célestin story, intrepid tweeter “Madame Boukman — Justice 4 Haiti” noted, “Justin ‘Blackface’ Trudeau, like those before him, knowingly supports drug traffickers, money-launderers and assassins in Haiti. That is the only way Canadian mining vultures can loot Haiti’s massive gold reserves.”

This about sums it up.

• On February 28 the Canadian Foreign Policy Institute is hosting a discussion of Haiti Betrayed, a powerful indictment of Canada’s role in the 2004 coup and subsequent policy in the country. In the week leading up to the event the film will be available to watch for free for those who register in advance.

Yves Engler is the author of 10 books, including A Propaganda System: How Canada’s Government, Corporations, Media and Academia Sell War and Exploitation. Read other articles by Yves.