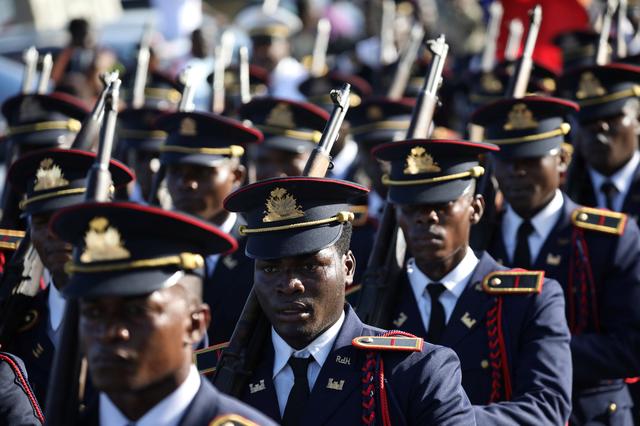 Haitian Ministry of Defense has shown interest in acquiring the Galil Córdova SAR (C-SAR) 5.56x45mm rifle for the country’s Armed Forces, according to a report on the Infodefensa website. The weapon is manufactured by Colombian company Indumil with authorization from Israeli company IWI.

The Córdova SAR, part of the C-SAR line, is 992 millimeters long (or 937 millimeters long with the stock folded) and weighs between 3.4 to 3.7 kilograms. It has effective ranges of 300 to 500 meters and includes a gas-powered reloading system with a rotating bolt, which allows it to fire up to 700 rounds per minute, using 35-round curved magazines, with a projectile velocity of 915 meters per second, according to the website.

The rifle is characterized by its low weight, due to the replacement of some of its metallic components with ones of different composition, as well as by its use with Meprolight’s Mepro 21 and Mepro MOR day/night illuminated reflective sights. The Córdova SAR is currently being used by the Colombian Armed Forces.

Procurement of the weapons is in line with Haiti’s plan to expand its Armed Forces and replace the weapons of their units. The country asked Indumil for information on the technical characteristics, manufacturing process, sale conditions, and maintenance of the Cordova SAR, the report said.

The Caribbean country, which has been rocked by civil unrest, has experienced weeks-long democracy protest calling for President Jovenel Moise to step down. Protesters say under his watch, the economic situation of the country has worsened; gang related violence and kidnapping for ransom taking the upward trajectory.

On Sunday, five priests and two nuns were abducted by kidnappers in the morning in Croix-des-Bouquets, a community northeast of the capital Port-au-Prince, while they were “on their way to the installation of a new parish priest”, a source told AFP.

The kidnappers had demanded a $1 million ransom for the group, which includes one French priest and one French nun.

President Moise is currently ruling Haiti, the poorest country in the Americas, by decree, fueling general mistrust of him.