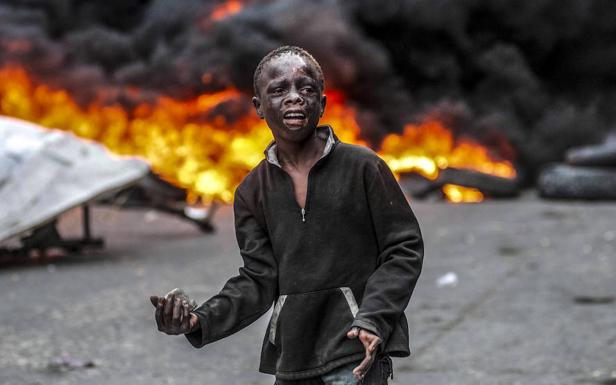 The executive summary of the report, which HLS co-published with the Observatoire Haïtien des crimes contre l’humanité, describes the acts of state-sanctioned violence under the presidency of Jovenel Moïse as probable “crimes against humanity” when considering their “scale, pattern, and context.”

At least 10 “brutal attacks” have occurred in areas of the capital where resistance against Moïse’s administration is prominent, the report states. The authors describe three attacks — which took place in La Saline in November 2018, Bel-Air in September 2019, and Cité Soleil between May and July 2020 — as “particularly well-documented and severe.”

“These three attacks offer insights into the means and methods used to carry out the assaults, and the ways in which state actors have supported the orchestration and execution of attacks,” the report reads.

Nathalie K. Gunasekera, a third-year student at the Law School and author of the report, said a key motivation of the report was to provide a more “accurate” representation of the attacks and “influence” the narrative of state culpability.

“The way the violence was covered in mainstream media, especially in Haiti, often depicted it as pure gang-related violence or inter-gang fighting,” Gunasekera said.

Joey Bui, a third-year student at the Law School and author of the report, said a “really important angle” of the report was that the attacks occurring in Haiti were not incidental, but rather motivated by governmental actors.

“It may be easy for people to almost dismiss the violence in Haiti just because of this stereotype that Haiti is a violent country,” Bui said. “It’s not just random violence, this is state-sanctioned violence.”

The report argues it is “crucial” Haitian officials hold those complicit in the attacks “responsible for these crimes.”

“Accountability is critical to supporting rule of law, but also to ensuring an end to the grave human rights abuses that have placed Haitian communities in a state of terror,” it reads.

Bui said her project team at HLS — which at the time was beginning to research remedies for victims of cholera in Haiti — investigated the subject after receiving a request from human rights groups in Haiti.

“It was a really urgent situation, and the lawyers on the ground in Haiti had so much to deal with at the time, and didn’t quite have the capacity to look into crimes against humanity,” Bui said. “And there’s this added aspect that some Haitian human rights lawyers and civil society members had been threatened.”

Beatrice Lindstrom, a clinical instructor at the International Human Rights Clinic and author of the report, said that while there have been “thorough and courageous efforts” led by members of Haitian civil society to document the attacks, she believes the issue had not received adequate global attention.

“We haven’t really seen the human rights crisis in Haiti get the level of international attention that one would expect given the brutality of these attacks,” she said.

Nixon Boumba, a Haitian human rights activist and author of the report, said the publication has been “well-received” by the Haitian public, and is challenging the conventional relationship between civilians and their government.

“This report is trying to innovate, and to push the line with strategic litigation and to change the behavior and change relationship between the state, the ordinary citizen, and the action of the government,” Boumba said.

Boumba said he hopes to disseminate the report more broadly to make it “more useful” for Haitian people, particularly those who are marginalized.

“They are talking about, ‘We need justice, we need to be able to participate in the designing of our future,’” Boumba said. “We’re trying to push for justice throughout this report — I think it’s something very important, impactful, and powerful for us.”