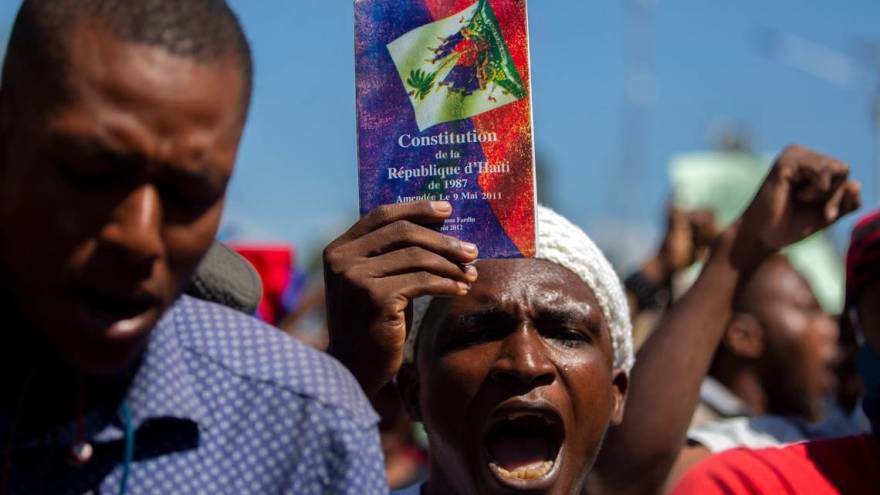 Haiti’s president is holding a controversial referendum next month on overhauling the 1987 Constitution. His Ambassador to the U.S., Bocchit Edmond, defends it.

Next month, Haiti will hold a referendum on reforming its 1987 Constitution. Haitian President Jovenel Moïse is pushing the change. He says it could make the country’s often dysfunctional government more effective – and give the Haitian diaspora more involvement in that government.

His opponents — and many legal experts — say the referendum itself is unconstitutional and could lead instead to more authoritarian government.

Here are excerpts from their conversation, which have been edited for clarity.

WLRN: Most Haitian constitutional experts argue that reforming the country’s charter requires a more complicated process than just a referendum. Why does President Moïse think doing it this way is constitutional?

EDMOND: I must tell you that this is not an exercise to modify the current constitution. We’re talking about a new text, a new constitution. There is nothing in the current constitution that forbids that. There is an independent committee put in place led by a former president of the republic, and a draft document that is being circulated to receive comments and suggestions. That finished text will be put on the referendum for the people to decide. But this is the way it’s done in any democratic society.

Why do you think so many Haitians, according to polls, want a new constitution?

Because they have lived it – and they realize it is almost impossible to have good governance with this current constitution. For example, in Haiti, once the president names the prime minister he cannot fire him. Only the Parliament can. We understand the 1987 Constitution was written right after the end of a dictatorship in Haiti and it wanted to limit executive powers. But now that prime minister has more power than the president – a prime minister who has never been elected by the people.

What’s more, a Haitian president takes office in February and often we find ourselves in May without a government because the Parliament still hasn’t approved a prime minister to run the government. And that can favor corruption in negotiations with parliamentarians. Therefore we have a big problem of governance in Haiti.

And this is why President Moïse wants to replace the position of prime minister with a vice president reporting directly to the president.

Of course, there is no other way we can solve this problem.

Do you also think it’s good for Haitian democracy to eliminate Haiti’s Senate, as the new constitution would do, and create a simple unicameral legislature?

Most Haitians will tell you the Senate is not popular, that it’s not very effective and a waste of money. Personally, I may not see it that way but that would be the will of the people.

At the same time right now, the U.N. says almost half of Haitians are going hungry. The criminal violence situation, especially the wave of kidnappings for ransom, is alarming. Is it fair for critics to suggest President Moïse should be more focused on those problems than on overhauling Haiti’s constitution?

One of the most controversial proposals was to let Haitian presidents serve two consecutive five-year terms. (Note: Right now, they have to wait five years before they can run again.) Critics fear that if referendum voters approve a change like that, President Moïse will simply run again in presidential elections scheduled for September. Will he?

No. The new draft, the new text, of the constitution does not allow a president to be re-elected president [for consecutive terms]. President Moïse cannot be re-elected under the new constitution. And let me make it clear for them that he’s not seeking reelection.

His opponents fear that possibility, I guess, because they say Mr. Moïse has become an authoritarian leader. He’s ruled by decree for the past year; he’s prevented parliamentary elections from being held. You feel those accusations are unfair?

They are unfair because they are not true. President Moïse twice sent the Parliament $50 million from the national budget for the legislative election? And he sent the electoral law to the Parliament. None of [it was] voted on, none of [it]. But he couldn’t force the parliament to vote on the law.

And those parliamentary elections will finally be held in September as well?

President Moïse’s supporters say he’s not part of Haiti’s corrupt elite and that he’s doing good things for regular Haitians. What is he doing right that you feel we in the international media might be ignoring?

Yeah, let me give an example. There are places in Haiti that for the last 217 years have never seen electricity. But President Moïse is electrifying these places, and installing solar powered pumps to distribute water for the small farmers. This is a good thing to applaud.

Of special interest to Haitian expats here in South Florida is a proposal to let members of the diaspora run for President and other high offices in Haiti.

Right, because we understand that Haiti cannot be a progressive country without the contribution of our diaspora. Most of our intellectual elite is in the diaspora today. Haitians abroad have lived democracy, they’re practicing it. And so we feel it would be best for Haiti to have those people participating in its reconstruction.