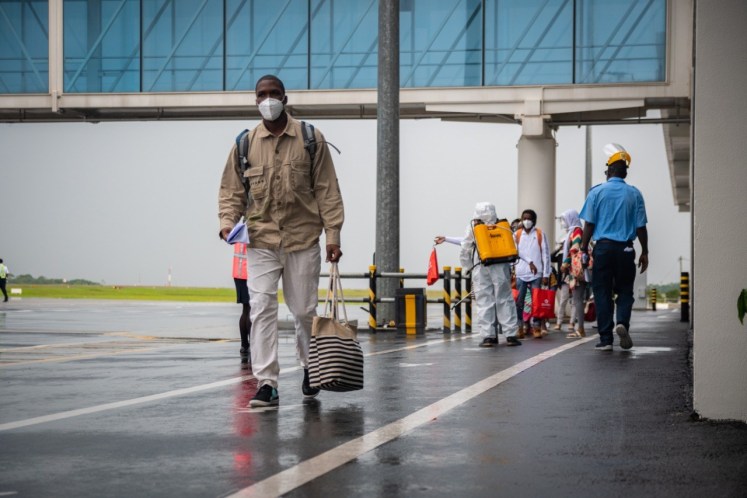 Haitians now require a visa to enter fellow Caricom country Guyana, while Venezuelans and Cubans get a free pass. The Indo-dominated governing party has been accused of racism towards people of African descent in the island country.

For months now the Indo-dominated governing People’s Progressive Party (PPP) has been signaling its discomfort with the number of Haitians entering fellow Caribbean Community nation Guyana, contending that they are victims of a well-oiled international human smuggling ring involving several South American nations including Brazil, Suriname and French Guiana.

Last week, authorities followed through with the threats to ban Haitian nationals from visa-free entry into Guyana while giving a free pass to the hundreds of Venezuelans who cross the border with Guyana each week despite a simmering border row that has on several occasions brought the two nations close to conflict.

The cabinet of President Irfaan Ali told the Haitian community in Guyana and abroad that they must now apply for visas to enter the country despite the fact that both are members of the 15-nation Caricom grouping. The imposition was immediately seen by opposition elements as a manifestation of PPP’s fear that the Haitians are being used to pad future voting list numbers with Afro potential voters even though data furnished by authorities shows that most would have transited to Brazil and French Guiana where there are growing Haitian expatriate communities. Most do not remain in Guyana.

“We are taking a position that will require visas for these nationals when they come, including Haitian nationals, Cuban nationals, etc., so the government of Guyana will be moving in that direction,” Attorney General Anil Nandlall said as the government announced the move. “We will have to deal with the allegations of race because that is all that the APNU+AFC [opposition] does,” he stated.

The AG had promised that similar visa entry requirements would have been imposed on the thousands of Cubans who travel to the bloc’s largest and most resource-rich member state to pick up American tourist and permanent status visas. Thousands of others also travel to Guyana as suitcase traders, taking back merchandise to sell back home. Officials are yet to announce any change of requirements for Cubans, who unlike the Haitians, have been settling and working, raising families in Guyana as they flee economic hardships back in the provinces.

Security Minister Robeson Benn told journalists recently that more than 30,000 who arrived in Guyana in the past three years cannot be accounted for. They have simply vanished.

“We know that they are not in Guyana. There are many reports of them going over the Corentyne [river], perhaps to French Guiana. We know that many of them are said to be going to Brazil. We understand and we believe that there is a strong element of human trafficking and people smuggling related going on. We will have to institute a system of visas being issued before any of those persons coming to Guyana, to make sure that those who are coming to Guyana are coming for legitimate purposes relating to proper business in Guyana or settlement in Guyana and/or return to their country having conducted business in Guyana. We cannot continue a system where persons pass through the country and disappear.”

Meanwhile, New York-based Guyanese and Caribbean political activist Rickford Burke last week accused authorities of being on an organized and orchestrated campaign against Guyanese of African descent, charges the PPP has denied.

“The apartheid PPP government of Guyana has now officially banned Haitians from traveling to Guyana in clear violation of the Guyana constitution and the Caricom treaty. They also recently refused 19 Nigerians entry into Guyana and launched a vicious, racist attack on the Prime Minister of Trinidad & Tobago Dr. Keith Rowley. The racist PPP ethnocracy has only been installed in government for 10 months, and purportedly won the March 2, 2020 general elections with 15,000 votes. This has apparently granted them rights to launch a vicious war on Black people in Guyana, the Caribbean, the United States and Africa. What appears imminent is a plan to divide Guyana along ethnic lines,” Burke said in a social media post.

Published in Editorial, Oceania & the Caribbean and World