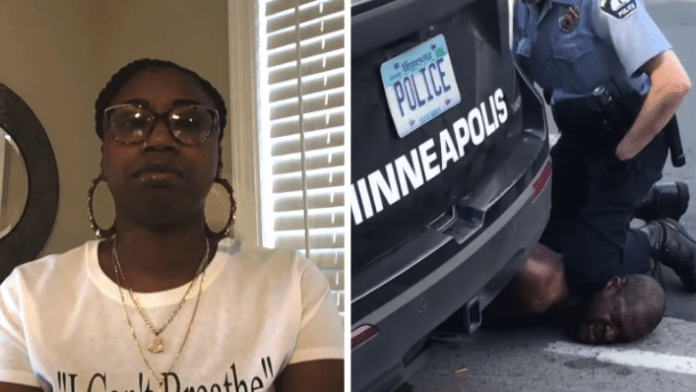 Bridgett Floyd has called for justice to be done on her brother’s case. George Floyd died on Monday after a sadistic white police officer knelt on his neck for over five minutes.

“Everything went blank,” she told ABC News in an interview on “Good Morning America” on Wednesday. “I had a very hard time taking that, taking that in.”

Disturbing video later emerged on social media showing a white police officer with his knee on a black man’s neck as he repeatedly yells out, “I can’t breathe.”

“I can’t breathe, please, the knee in my neck,” the man can be heard saying in the video as he’s pinned to the ground. “I can’t move … my neck … I’m through, I’m through.”

The Minneapolis Police Department said in a statement Monday that their officers were initially called to the scene “on a report of a forgery in progress.” The officers were advised that the suspect “appeared to be under the influence” and that he “physically resisted officers.”

The suspect later “appeared to be suffering medical distress” and officers called an ambulance. He was transported to the Hennepin County Medical Center in Minneapolis, “where he died a short time later,” according to the statement, which noted that there were no weapons of any type used by anyone involved in the incident and that no officers were injured.

The Hennepin County Medical Examiner told ABC News the “cause” of death is pending further tests and investigation.

Darnella Frazier via StoryfulIn an image made from video posted to Facebook, a Minneapolis police officer kneels on the neck of a man identified by a family attorney as George Floyd, May 25, 2020. Floyd died shortly after the incident

Police did not identify the man who died, but civil rights attorney Ben Crump, who is representing his family, said he was George Floyd.

Bridgett Floyd said she hasn’t watched the footage herself but has been told what it shows.

“It’s wrong. I don’t understand how someone could possibly let an individual go out like that,” she said. “I’m just imagining it in my head, and it’s very heartbreaking.”

George Floyd worked as a security guard at Conga Latin Bistro in Minneapolis for more than five years, according to Jovanni Thunstrom, the owner of the restaurant, which is closed due to the coronavirus pandemic.

Thunstrom told ABC News that George Floyd was renting a duplex apartment from him and that he had a daughter in Houston whom he was planning to bring to Minneapolis to live with him.

“I loved him like a brother,” Thunstrom told ABC News in tears on Tuesday, describing him as an excellent person whom many of the customers and employees loved.

Earlier, Minneapolis Mayor Jacob Frey announced that all four responding officers involved in the incident have been fired.

“Being black in America should not be a death sentence,” Frey said at a news conference Tuesday morning. “When you hear someone calling for help, you’re supposed to help. This officer failed in the most basic, human sense.”

Bridgett Floyd said terminating the officers is “definitely not enough justice for me or my family.”

“They murdered my brother. They killed him,” she told ABC News. “Firing them is just not enough.”

As a mother to black sons, Bridgett Floyd said she worries the same fate could happen to them when they grow up.

“You never know what could happen when they walk out the door. They’re small kids right now, but one day they’re going to be adults,” she said. “They need to know how to defend themselves, how to stand up for themselves, how to talk for themselves because if I don’t teach that to them, this world, this cold, cold world will take over my babies.”