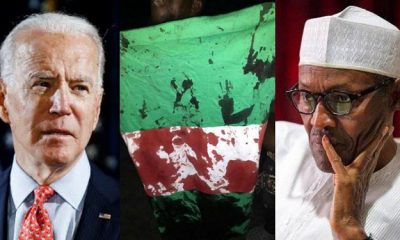 Nigeria is currently experiencing a bloodbath as alleged government soldiers opened fire at unarmed #EndSARS protesting youths at the Lekki tollgate plus other major roads in Lagos and other locations around the country where the protests are getting intense. Over 30 lives were lost at the Lekki tollgate alone.

The incident took place around 7 PM on Tuesday. The Lagos state governor Jide Sanwo-Olu had declared a curfew to commence by 4 PM, which was later shifted to 9 PM. But, around some minutes past 7 PM, the Nigerian army stormed the Lekki tollgate where thousands of protesters were gathered and opened fire indiscriminately, despite the youths wielding the country’s flag.

Nigerian youths went out on the roads to unitedly protest against police brutality and bad governance, but instead of proffering lasting solutions, the Nigerian government allegedly used sponsored thugs and deployed the armed forces to unleash terror on the unarmed protesting youths

Since the protest started about 13 days ago, President Muhammadu Buhari is yet to make an official televised address to the nation, with frustrated many now demanding his resignation owing to incompetence

According to SaharaReporters, the Nigerian Army – after killing tons of unarmed protesters at the Lekki tollgate – seized the bodies of as many as they could to cover the evidence on Tuesday night. According to the report, one of the protesters at the scene, DJ Switch, who live-streamed the attack, said the bodies of those killed were now in the possession of Nigerian Army personnel.

Prominent personalities like Joe Biden, Hillary Clinton, Beyonce, Anthony Joshua, Cardi B, Nicki Minaj, Rihanna, etc., have condemned the ‘genocide’ happening in Nigeria under the watch of the Buhari-led government.

The former US Vice President and now Presidential Aspirant, Joe Biden, commented on the alleged shooting of Protesters, as well as violence across the country.

Here is his statement,

“I urge President Buhari and the Nigerian military to cease the violent crackdown on protesters in Nigeria, which has already resulted in several deaths. My heart goes out to all those who have lost a loved one in the violence. The United States must stand with Nigerians who are peacefully demonstrating for police reform and seeking an end to corruption in their democracy. I encourage the government to engage in a good-faith dialogue with civil society to address these long-standing grievances and work together for a more just and inclusive Nigeria.” Joe Biden

The Nigerian youths started the protest against police brutality after recorded videos of the men of SARS killing a young man was shared enormously on social media. The viral video was the latest among a long list of evidence of SARS killing youths. This provoked an outrage and had the youths protesting with the #EndSARS hashtag while many hit the streets and major roads in protest.

It soon morphed into a protest against bad governance as the corruption and rot in the Nigerian government started getting exposed.

Although many have died, Nigerian youths say they won’t back down until they have the “New Nigeria of our dreams.”