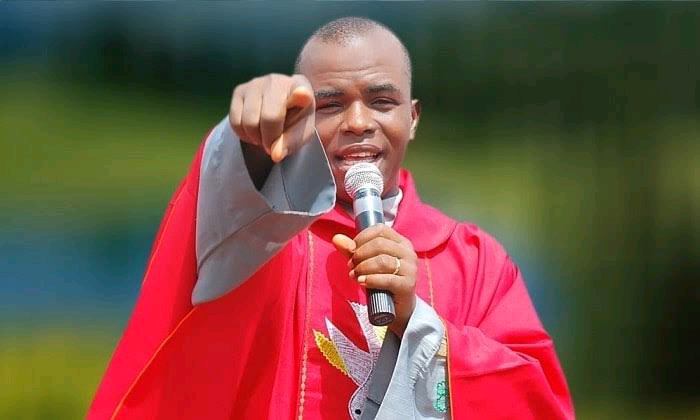 The founder of Adoration Ministry, Enugu, Reverend Fr Ejike Mbaka has urged the Nigerian government to release the leader of the Indigenous people of Biafra, IPOB Mazi Nnamdi Kanu, stating that there is still a high rate of insecurity in the country despite his arrest.

The Catholic priest was said to have made the call during a sermon on Sunday, at his adoration ground.

Mbaka said he made the request when some government agents, whom he did not mention, allegedly came calling with some offers.

He said, “Some persons came to me some time ago that they have two slots for me. I told them I don’t need such offers because I have a slot that I need. They said I should mention what I need.

“My first request was that they should release Nnamdi Kanu because since you people arrested him, we have lost many lives, so of what use is his arrest if after he was arrested, kidnapping hasn’t stopped in the North? Arresting him doesn’t solve the problem.”

“Where were the nation’s security agencies when several students were kidnapped?” he asked. However, Mbaka urged the government to use the same energy used in arresting Kanu to arrest kidnappers, insecurity, poverty, unemployment, activities of herdsmen, injustice, and nepotism.