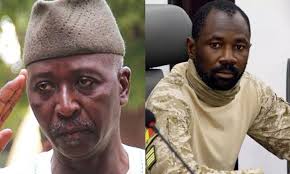 Former Mali’s defence minister Ba N’Daou has been announced as president of a new transition government, the leader of the Sahel state’s ruling military junta said on national television Monday. Colonel Assimi Goita, the coup leader and Head of the National Committee for the Salvation of the People, becomes Vice President.

The African Union and ECOWAS had mounted pressure on the military junta to quickly appoint civilian leaders to manage an 18-month transition towards elections after the ouster of Ex-president Ibrahim Boubabcar Keita.

However, according to designs of the junta, the new president is meant to lead the country for several months before staging elections and returning Mali to civilian rule.

The junta had initially demanded 3 years in power, but ECOWAS said it would only allow an interim government, headed by a civilian or retired military officer, to last for six months or a maximum of a year.

ECOWAS later called for the appointment of a civilian president and prime minister for a transitional period by September 23, threatening to impose a full embargo on Mali.

After several negotiations, the military junta settled with an 18-month long interim government.

Although the M5 opposition movement has already outrightly rejected the charter, it appears it would partake in the election to usher in a civilian government which would be held after 18 months.