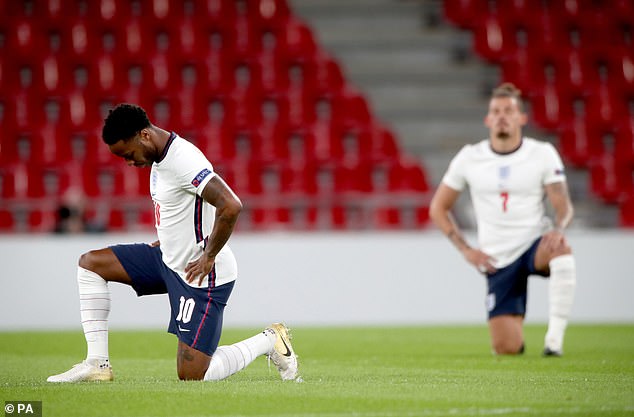 Football: England’s Players Will Not Be Sanctioned For “Taking The Knee” Ahead World Cup Qualifiers With San Marino

England’s players will not be sanctioned if they take the knee ahead of this week’s World Cup qualifiers, FIFA has assured the English FA.

According to MailOnline, the triple-header against San Marino, Albania and Poland will be England’s first matches in a FIFA competition since they began showing their support for the Black Lives Matter movement last September by kneeling before kick-off, a gesture that in normal circumstances would be a breach of FIFA rules.

FIFA Law Four states that it is an offence for players to make ‘political, religious or personal statements’ — but the world governing body relaxed their position following the killing of George Floyd in the U.S. by a white officer Derek Chauvin last summer.

However, FIFA told competition organisers to use common sense when enforcing the rules.

As Southgate’s players remain eager to continue demonstrating their support for racial equality when San Marino visit Wembley on Thursday, the FA had to seek clarification from FIFA.

‘This is a demonstration of the injustices that different races within football have felt,’ said England defender Tyrone Mings, speaking in favour of taking the knee. ‘We have unified the sport in a pre-game anti-racism message.

‘It is so powerful and it is something we shouldn’t let go. I haven’t heard one substantial argument as to why we should stop it.’