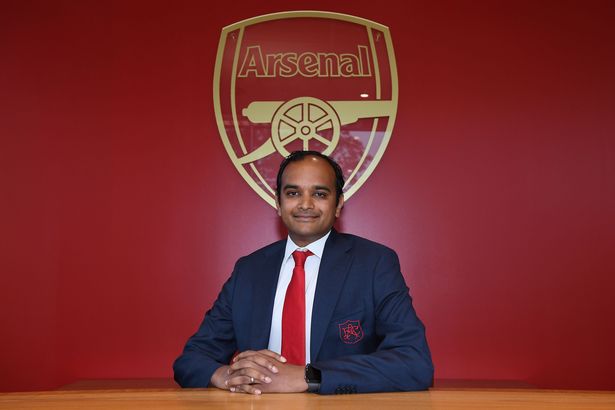 Arsenal chief executive Vinai Venkatesham voiced his concern over racist attacks against Black players on social media calling it football’s “biggest problem” and going further to state that its impact “cannot be underestimated”.

Arsenal striker Eddie Nketiah is the latest high-profile footballer to be targeted after he was urged to leave the club in a racist message sent in reply to a training picture he posted on Twitter ahead of his side’s Europa League tie against Benfica.

Arsenal’s chief executive Vinai Venkatesham has called on social media companies to do more in the fight against racism online, expressing concerns that toxic abuse is becoming normalised.

Venkatesham, having worked in various capacities in Arsenal since 2010, questioned the intentions of social media companies who are quicker to remove pirated video content than tackle racist abuse on their platforms.

A number of Arsenal players have been subject to racist abuse from their own fans in recent weeks, among several others from different clubs, as the culture of online abuse grows increasingly toxic. Granit Xhaka was recently racially abused by fans identifying as season ticket holders, while striker Eddie Nketiah was abused on Twitter as recently as Thursday morning.

Speaking at the Financial Times Business of Football event on Thursday, Venkatesham said: “This is possibly the biggest problem we have in the game at the minute.

“Footballers, referees, officials are all human beings with feelings. You can’t underestimate the impact social media abuse can have on individuals.”

As Arsenal boss Mikel Arteta alluded to in a recent press conference, the club have support structures in place for players when they are suffering from online abuse.

But Venkatesham believes social media companies need to do more and back up their recent words with actions.

“We provide support and psychologists but I don’t want to be writing another release on how disgusted we are,” he said.

“This has to be a wake up call. It’s increasingly becoming normalised and in 2021 we can’t be having a conversation about it becoming normalised. I’m not saying it’s simple, easy with a silver bullet to solve it but players and social media companies need to come together.

“It’s a moment in time and if we don’t make progress I worry about the path we’re heading on. We need the support of social media companies here.

“We can’t do it alone. How do you explain to a black footballer that if a piece of pirated content goes up, it gets taken down in minutes but that isn’t the same for racist abuse?