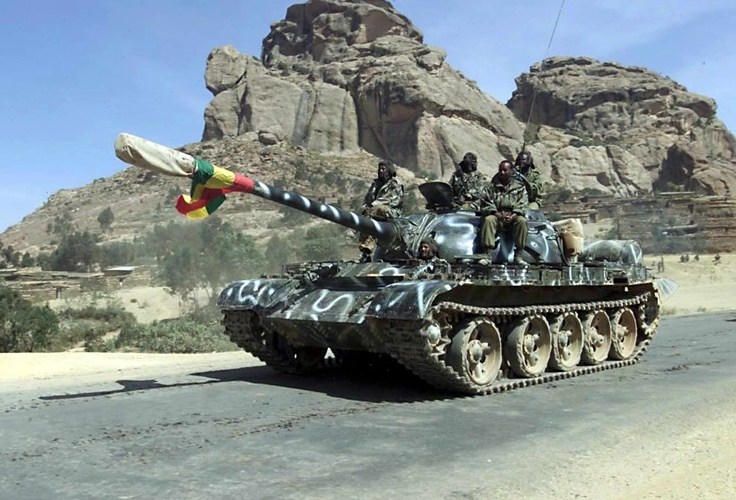 Heavy fighting has been reported in several areas in Ethiopia’s northern region of Tigray between rebels and federal troops.

The rebel Tigray Defence Force (TDF) said it had seized several towns, where witnesses have told the BBC they have seen its fighters patrolling, BBC reported last night.

The federal Ethiopian army dismissed the claim, saying it was fake news.

This is the most serious fighting since November when the Ethiopian government declared victory in the conflict.

Thousands of people have been killed and millions displaced in the war that started almost eight months ago.

About five million people in Tigray are in need of food aid and more than 350,000 are living in famine conditions, according to a recent UN-backed estimate.

The reports of the fighting comes as ballots are being counted from Monday’s general election. No voting took place in Tigray because of the security situation.

Rebel spokesman Gebre GebreTsadiq said that the TDF had launched the attack last week targeting several towns. He said the fighters had destroyed military vehicles and captured some soldiers.

Witnesses have told the BBC that rebel forces have entered the strategic town of Adigrat, which is just 45 km (30 miles) from the Eritrean border. If confirmed, this would be the most significant rebel advance since the war began.

TDF fighters have also been seen in several towns both to the north and south of the region’s capital of Mekelle.

Army spokesman Colonel Getnet confirmed there was fighting but denied that any towns, army equipment or soldiers had been captured.

“While the Ethiopian government was busy with the national elections and the GERD [Grand Ethiopian Renaissance Dam] issues, the terrorist TPLF [a key part of the TDF], along with its young recruits, was actively involved in terrorist activities,” he said.

He added that operations were underway to capture the rebel leaders.

According to BBC Tigrinya’s Teklemariam Bekit, this is the rebels’ biggest offensive since the conflict began in November last year.

They suffered a series of setbacks at the start of the war, but now seem to have regrouped and are preparing for a long, brutal war.

The timing is instructive, it started just days before the election which the ruling party is widely expected to win.

The key question is: Will Prime Minister Abiy Ahmed use his electoral mandate to enter into talks with the rebels or he will press ahead with seeking victory on the battlefield?

What is not in doubt is the rebels have sent a strong message to the rest of the world that Ethiopia is at war, despite the government’s narrative that the fighting was almost over.

The reports of the rebel capture of Adigrat, which is within striking distance of Eritrea, would be significant, suggesting that Eritrean troops will not be withdrawing from Tigray any time soon despite growing international pressure.

This war is set to linger for a long time, aggravating Tigray’s already dire food shortages and imminent famine.

Ethiopia’s government, aided by troops from neighboring Eritrea, launched an offensive in November last year to oust the region’s then ruling party, the Tigray People’s Liberation Front (TPLF). By the end of the month, it declared victory.

The TPLF had had a massive fallout with Mr. Abiy over his political reforms though its capture of federal military bases in Tigray was the catalyst for the invasion.

The TPLF has since joined forces with other groups in Tigray to form the TDF.

Speaking to the BBC on Monday after casting his vote in the twice-delayed national election, Prime Minister Abiy Ahmed said he was working with the Eritrean troops to get them to leave but said he would not “push them out”.

They are accused of carrying out massacres, mass rape, and blocking humanitarian aid – charges Eritrea has denied.

Abiy also denied that there was hunger in Tigray. He admitted there was a problem but said the government could fix it.