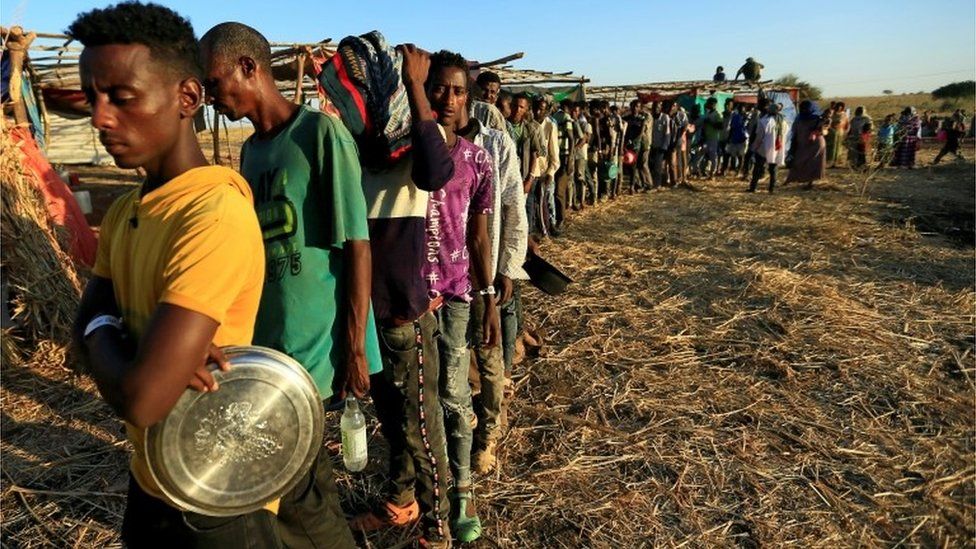 Ethiopia Tigray Conflict: Fear Of Mass Starvation As Over 4.5 Million People In Need Of Food Aid

Ethiopia’s Tigray region has been hit hard by the ravages of war, as thousands might reportedly starve to death, according to a government official quoted in a leaked copy of notes taken at a meeting of humanitarian workers.

The federal government declared victory at the end of November, after weeks of engaging in a war against the TPLF army aimed at bringing Tigray under subjection amidst calls for independence.

Ethiopia’s President Abiy Ahmed who recently won a Nobel Peace Prize after he came to power in 2018, resorted to violence in subduing the renegade Tigray leaders whom he accuses of trying to divide the country.

After the capture of Tigray’s capital of Mekelle, victory was declared. However, the Tigray People’s Liberation Front (TPLF) has declared that it would continue fighting until the ‘invaders’ are out.

Mass extrajudicial killings of civilians took place during November and December 2020 in and around Adigrat, according to a research report. And President Afwerki’s Eritrean forces have been accused by Tigray of fighting for the federal government against the region. An accusation Eritrea has refuted.

Despite the declaration of victory, sporadic fighting has continued and the UN has described the humanitarian situation as “severe”.

It added that “reports indicate that food is not available or is extremely limited in markets, posing increased risks of malnutrition”.

The ECC says that 4.5 million people need emergency food aid in Tigray, according to a figure quoted in a UN report. The population of Tigray is between 5-7 million. More than 50,000 have fled to neighbouring Sudan.

In a statement on Friday, the Ethiopian embassy in London said the authorities wanted to help those in need.

“The government of Ethiopia remains committed to working closely with its humanitarian and development partners to address any outstanding challenges that could hinder the safe, effective, and efficient delivery of humanitarian assistance to all affected populations,” it said.

The UN has said that access to parts of Tigray is still limited but some aid is getting through.

Communication with much of the region remains difficult as phone lines and the internet have been cut making the verification of reports hard.

Report of people ‘dying while they sleep’

According to the leaked notes taken by a participant at an ECC meeting on 8 January, an official from the interim administration of the central part of Tigray “said that the situation [on] the ground is dire”.

“Food and non-food items or other livelihoods are either looted or destroyed. He also added that if urgent emergency assistance is not mobilised hundreds of thousands might starve to death.””People are dying because of starvation. In Adwa people are dying while they are sleeping,” he was quoted as saying.

Another official, quoted in notes from a meeting on 1 January describing the humanitarian needs, said that “while we were on the road and visit different places, people asked our escort for a single biscuit”.

Ethiopia’s defence forces invaded Tigray in November 4 to oust the region’s ruling party after its troops had attacked and captured federal military bases.

According to BBC, Prime Minister Abiy Ahmed insists that the army has been using proportional force to restore law and order and bring a “criminal clique” to justice.

However, EU Foreign Affairs Chief Josep Borrell said in a statement on Friday that the situation on the ground had gone “well beyond a purely internal ‘law and order’ operation”.