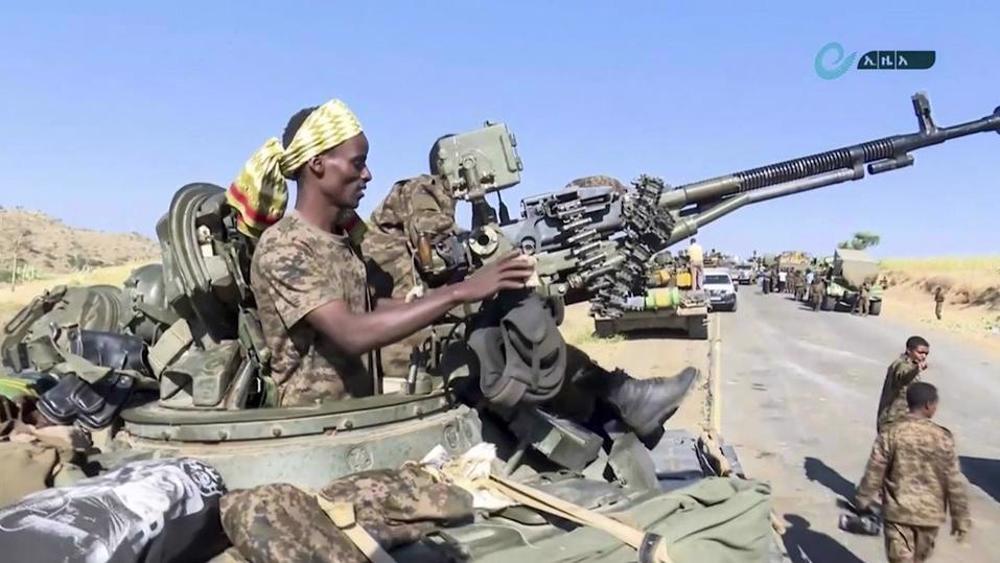 Eritrea Admits Its Forces Still In Tigray, Vow To Pull Out

Eritrea has admitted its troops are involved in the war in Ethiopia’s northern Tigray region but vowed to pull them out amid mounting international pressure.

The country’s first admittance of its role in the fighting came in a letter from its UN ambassador to the Security Council, which was posted online by Eritrea’s information minister on Friday night.

Eritrea has admitted its troops have played a role in the war in Ethiopia’s northern Tigray region but has vowed to pull them out amid mounting international pressure.

The first explicit admission of Eritrea’s role in the fighting came in a letter posted online Friday night by the country’s information minister, written by its UN ambassador and addressed to the Security Council.

Until recently, the Ethiopian and Eritrean governments had for months denied Eritreans were involved, contradicting testimony from residents, rights groups, aid workers, diplomats and even some Ethiopian civilian and military officials.

Abiy finally acknowledged the Eritreans’ presence in March while speaking to lawmakers, and vowed soon after that they would leave.

Both Eritrea and Ethiopia blame the conflict on TPLF-orchestrated attacks on federal army camps in early November and describe it as a campaign to restore law and order.

Tigray residents have repeatedly accused Eritreans of mass rape and massacres, including in the towns of Axum and Dengolat.

Friday’s letter from Eritrea said that with the TPLF “largely thwarted”, Asmara and Addis Ababa “have agreed — at the highest levels — to embark on the withdrawal of the Eritrean forces and the simultaneous redeployment of Ethiopian contingents along the international boundary.”

On Thursday UN aid chief Mark Lowcock told the Security Council that despite Abiy’s earlier promise, there had been no evidence of a withdrawal of Eritrean troops from the region.

“Without a ceasefire, this already grave humanitarian crisis is only going to get a lot worse,” Mr Lowcock said.

“Since the conflict began, civilians have endured indiscriminate shelling of towns, targeted violence, mass killings and executions and systematic sexual violence as a weapon of war.”

An attack by Eritrean troops that left at least nine civilians dead in the Ethiopian town of Adwa on Monday showed the continued Eritrean military presence in Tigray despite promises last month that forces would withdraw.

“Neither the UN nor any of the humanitarian agencies we work with have seen proof of Eritrean withdrawal,” said Mr Lowcock.

“We have, however, heard some reports of Eritrean soldiers now wearing Ethiopian Defence Force uniforms. And regardless of uniform or insignia, humanitarian staff continue to report new atrocities which they say are being committed by Eritrean Defence Forces.”

Eritrea’s information minister, Yemane Gebremeskel, said on Twitter Saturday that Asmara had summoned the UN’s resident coordinator in Eritrea and the local head of the UN humanitarian coordination office to protest “wayward practices and fallacious reports… on basis of opaque networks/affiliations with TPLF.”

“We are indeed appalled by attempts to blame those who were forced to resort to legitimate measures of self–defense that other countries would have done under similar circumstances,” she wrote.

“The allegations of rape and other crimes lodged against Eritrean soldiers is not just outrageous, but also a vicious attack on the culture and history of our people.”

Abiy declared victory in Tigray in late November after federal forces took the regional capital Mekele, but the TPLF vowed to fight on and fighting has continued.

There are also widespread hunger crisis fears due to the inability of the Tigray people to harvest crops because of the war. Unprecedented famine has been predicted in the region if the situation remains the same.