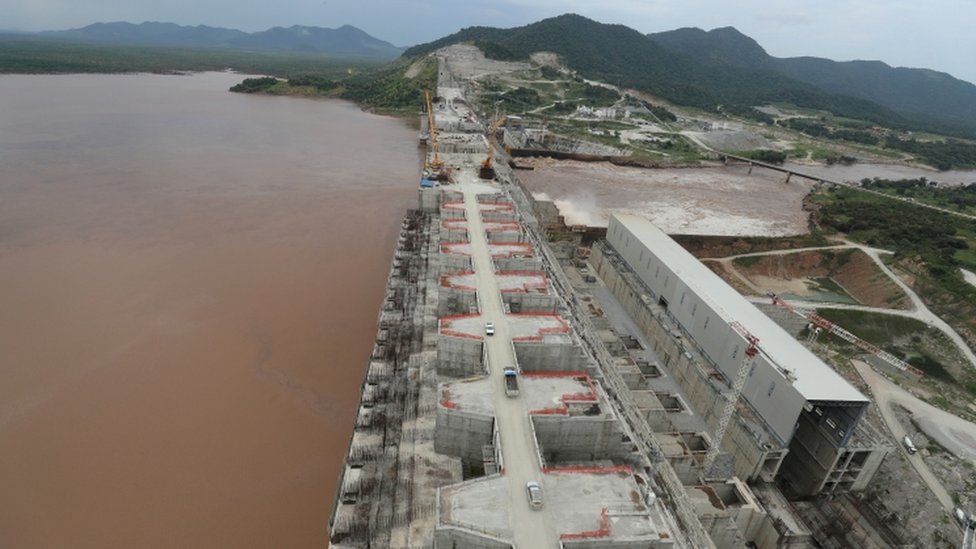 A new battle between Ethiopia and Egypt has surfaced against the backdrop of the dispute over the Grand Ethiopian Renaissance Dam (GERD). The two African countries are now fighting over export of electricity to Africa.

Ethiopia is poised to fulfill its ambition to export electricity from the GERD. Ethiopian Ambassador to Uganda Alemtsehay Meseret held talks with Burundi’s Minister of Water, Energy and Mineral Ibrahim Uwizeye on July 7. During the meeting, Uwizeye affirmed that his country is waiting for the completion of the dam to buy electricity from Ethiopia.

Ethiopia is working to generate about 6,000 megawatts (MW) of electric power from the GERD. In 2014, it announced its plan to export 5,000 MW of electricity to neighboring countries and Africa within 10 years.

In June 2020, Ethiopian Prime Minister Abiy Ahmed confirmed at a parliamentary session that “Ethiopia will start exporting electricity from the GERD in 2023.”

In turn, Ethiopian Minister of Irrigation Seleshi Bagli announced in April 2021, “The production of electric power from the GERD will start in August, after the completion of the second filling of the dam’s reservoir.”

Ethiopia already exports electricity to its neighbors Kenya, Sudan and Djibouti. In a report in 2015, Reuters reported that Ethiopia “has signed deals to send power to Tanzania, Rwanda, South Sudan and Yemen as well, particularly from hydropower.”

However, Addis Ababa aims to scale up its production and export of hydroelectricity to African countries through the GERD.

Meanwhile, Egypt is making contacts with African countries, especially those Ethiopia aims to export electricity to. Egypt is trying to supply these countries with electricity by helping them establish power plants and exporting electricity to them.

Burundi is one of these African countries and Egypt had offered to invest in the field of electricity in the country. Egyptian President Abdel Fattah al-Sisi stressed during talks with Burundian President Evariste Ndayishimiye in March 2021 Egypt’s keenness to support Burundi’s development needs, especially in the electricity sector, by maximizing the investments of specialized Egyptian companies.

In a related context, the Egyptian private company, Orascom, is part of the joint venture constructing the Jiji and Mulembwe hydropower project on Burundi’s Jiji River. The project aims to generate a production capacity of 50 MW.

In February, Egyptian Ambassador to Burundi Yasser al-Atwy expressed to Uwizeye his country’s desire to provide assistance and support to raise the production capacity of electricity in Burundi, and to train Burundian engineers and technicians in the field of electricity.

Egypt also turned to Djibouti. Sisi visited Djibiouti in May and agreed with his counterpart to increase Egyptian investments and to allow Egyptian companies to contribute to infrastructure projects, inter alia electricity projects.

In 2018, the Djiboutian Minister of Energy and Natural Resources, Yonis Ali Guedi, visited Cairo. Guedi concluded a memorandum of understanding on an electricity deal with his Egyptian counterpart, Mohammed Shaker. The deal aimed to enhance bilateral cooperation in the field of electricity and establish solar power plants.

Ethiopia exports electricity to Sudan. It showers Khartoum with promises that it will expand exports thanks to the GERD electricity. However, the Egyptian-Sudanese cooperation in the field of electricity, most notably through the electrical interconnection project, has somewhat alleviated the power crisis hitting Sudan. In March, the two countries signed an agreement to raise the capacity of their electrical interconnection from 80 to 300 MW.

Egypt is also helping Tanzania — which had signed contracts to purchase electricity from Ethiopia in 2016 — in the construction of the Julius Nyerere Dam. The dam includes a hydroelectric power plant, the largest in Tanzania, with an electric capacity of 6,307 MW-hours annually.

Several African countries suffer from an electricity crisis. To fill its power shortage, Kenya agreed to buy 400 MW of energy from Ethiopia. This did not keep it, however, from seeking cooperation with Egypt. Kenya asked Cairo to urge its specialized companies to invest in the field of electricity generation and energy.

In December 2019, Sisi announced his country’s readiness to export electricity to African countries at a low price. This came as part of Egypt’s plan to expand electricity exports to Africa.

Abbas Sharaki, professor of water resources at Cairo University, told Al-Monitor that Egypt is following a strategy to strengthen its influence once again in Africa through projects and investments, and to help the countries of the continent solve their crisis.

He said, “African countries — especially Nile Basin countries — have acute electricity shortages, which Ethiopia is exploiting. Egypt is aware of that. Ethiopia deludes its people that the GERD will solve the electricity crisis. But this will not be possible in the absence of infrastructure projects to distribute electricity to all regions of Ethiopia.”

Sharaki added, “The Ethiopian government chose the easiest way, which is to export the electricity of the GERD to Africa rather than meeting the needs of its own people.”

In statements during his June meeting with President of the Republic of South Sudan Salva Kiir, Egyptian Minister of Irrigation Mohamed Abdel Aty refuted Ethiopia’s claims that the GERD will provide electricity to Ethiopia and its neighboring countries.

Abdel Aty pointed to contradicting statements by Ethiopian officials. He noted that they stress the importance of the GERD in providing electricity to the Ethiopian people who are deprived of electricity, while the Ethiopian government is seeking to export this electricity abroad.

In a report published in October 2020, the London-based newspaper The Independent had confirmed that half of Ethiopia’s population does not have access to electricity.