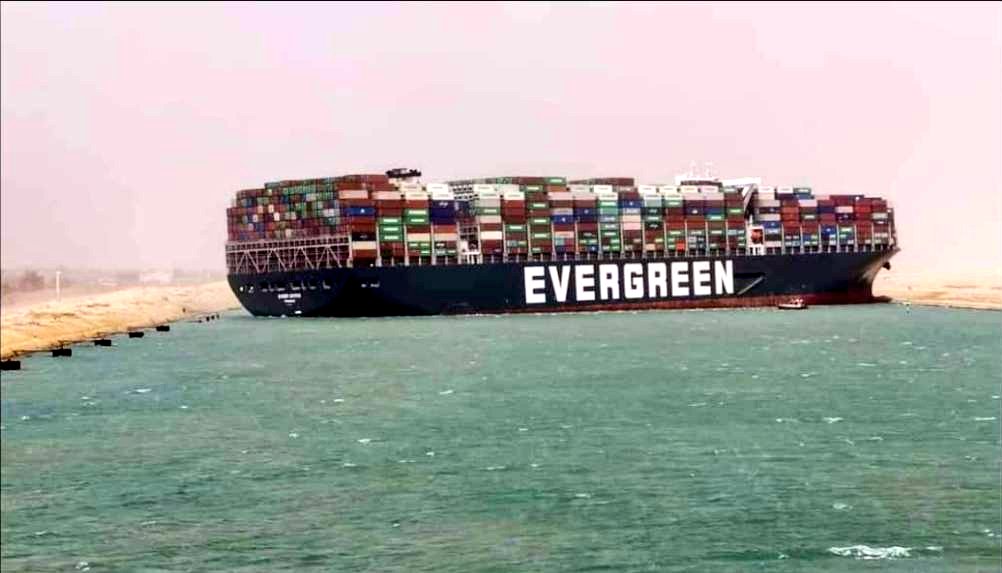 Egypt is accelerating efforts to dislodge a giant container ship stuck sideways in the Suez Canal for the past three days, which has blocked a crucial waterway for global shipping.

Tugboats and a specialized suction dredger worked Friday to dislodge the Ever Given, a Panama-flagged ship that carries cargo between Asia and Europe.

According to AP, the ship ran aground in the narrow canal that runs between Africa and the Sinai Peninsula. It got stuck in a single-lane stretch of the canal, about six kilometers (3.7 miles) north of the southern entrance, near the city of Suez.

The ship is one of the world’s largest containers, carrying 20,000 containers, and weighs more than 200, 000 tons. It is owned by the Japanese firm Shoei Kisen KK.

The blockage has caused headaches and losses for global trade, as about 10% of world trade flows through the canal, which is particularly crucial for the transport of oil. The closure also could affect oil and gas shipments to Europe from the Mideast.

With each passing day, the closed Suez Canal in Egypt is costing an estimated 9 billion dollars’ worth of goods that should be passing through the water way, according to famed shipping journal, Llyod’s List.

At least 150 ships were waiting for the Ever Given to be cleared, including vessels near Port Said on the Mediterranean Sea, Port Suez on the Red Sea and those already stuck in the canal system on Egypt’s Great Bitter Lake, said Leth Agencies, which provides services for the canal.

The backlog of vessels could stress European ports and the international supply of containers, already strained by the coronavirus pandemic, according to IHS Markit, a business research group. It said 49 container ships were scheduled to pass through the canal in the seven days following Tuesday, when the Ever Given became lodged.

As of Friday morning, the vessel remained grounded, Leth Agencies added. It remains unclear when the route would reopen.

An Egyptian official at the Suez Canal Authority described the work as complex and said those trying to dislodge the vessel wanted to avoid complications that could extend the canal closure. The official spoke on condition of anonymity as he was not authorized to talk to journalists.

The Ever Given’s bow was touching the eastern wall, while its stern appeared lodged against the western wall.

A team from Boskalis, a Dutch firm specialized in salvaging, started working with the canal authority Thursday. The rescue efforts have focused on dredging to remove sand and mud from around the port side of the vessel’s bow.

It remains unclear what caused the Ever Given to get stuck in the Suez Canal on Tuesday. GAC, a global shipping and logistics company, said the ship had experienced a blackout without elaborating.

Evergreen Marine Corp., a major Taiwan-based shipping company that operates the ship, said in a statement that the Ever Given had been overcome by strong winds as it entered the canal from the Red Sea, but that none of its containers had sunk.

Using data from Automatic Identification System trackers on ships at sea, data firm Refinitiv shared an analysis with the AP showing that over 300 ships remained en route to the waterway over the next two weeks.

With the continued blockade, some ships may be forced to changing course to avoid using using the Suez Canal, which would add about a week or more to the voyage.

The liquid natural gas carrier Pan Americas changed course in the mid-Atlantic, now aiming south to go around the southern tip of Africa, according to satellite data Friday from MarineTraffic.com.