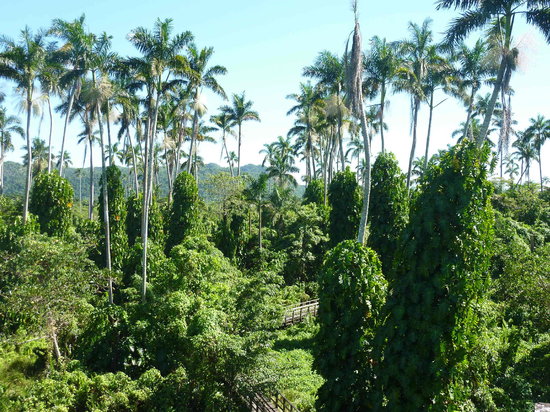 This has negatively affected many species of flora and fauna as the ecosystems of which they are a part are diminished; subsequently their numbers are fewer and there is less and less diversity. Species which need specific conditions to live, such as those in high-elevation forest ecosystems, have been most severely affected as their habitats are reduced.

According to 2000 data from the Food and Agriculture Organisation, forest cover ranges from 30 per cent in Jamaica to 21 per cent in Cuba, and less than 15 per cent in the islands of St Kitts and Nevis, St Lucia, and St Vincent and the Grenadines.

Climate change, due to greater frequency of very severe hurricanes and rainfall events, is also making land degradation worse and accelerating the deterioration of both terrestrial and marine ecosystems through severe erosion, and pollutant and sediment mobilisation.

In addition to biodiversity loss, as the functionality and productivity of the land is reduced, people who depend on the ecosystem services it provides (for example, food and water; flood and disease control; spiritual, recreational, and cultural benefits) suffer. There is increasing poverty, social tension, inequity and hunger, which in turn leads to even poorer management of the natural resources.

In Cuba, IWEco’s largest project, for example, there is a rich biodiversity, with 9.2 per cent of species being endemic, including 750 species of plants and 179 species of animals – at least 110 of which are under threat and being given national and global conservation priority. Reforestation is a key activity of the project and environmental baselines are currently being conducted in four watersheds.

Restoration of biodiversity is also targeted for the Negril Great Morass, one of the largest natural coastal and ecosystems in the Caribbean region. This includes the Negril Royal Palm Reserve which provides refuge, breeding, feeding and nesting for a number of shore and wading birds, including the rare, endangered and Caribbean endemic West Indian whistling duck.

The upper reaches of St Lucia’s Soufriere Watershed is also rich in biodiversity, but the area is susceptible to land degradation due to steep slopes, soil types and heavy rainfall. Efforts are being made there to mitigate land degradation of more than 90 hectares so as to restore agricultural land productivity, and to reduce risk to life and property from landslide occurrence and the reduction of sedimentation into an adjacent marine protected area.

Even the smallest country participating in the IWEco project, St Kitts and Nevis, is working to restore land and protect valuable degraded ecosystems. In St Kitts, ongoing land-restoration works will reduce and reverse land degradation in the College Street Ghaut; and in Nevis, activities at selected abandoned quarry sites and sand-mined beaches will reduce destruction to the mangroves and coral reefs downstream.

Culled from The Gleaner

Published in Forest, Land, NatureWatch, Oceania & the Caribbean and World