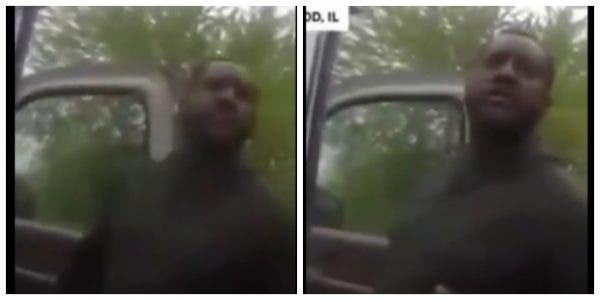 A white police officer has been caught on camera asking an Illinois black man to lick his own urine after a stop.

Chicago Tribune reported that the man who was a federal safety investigator identified as Marcus Mosley, and was tased by the officer during the altercation after he was accused of urinating by the road side.

In the video which was recorded by police body worn camera on May 17, 2019, the Defendant Lynwood Police Officer Luke Tambrini told Mosley he wasn’t allowed to park on the side of the road or to urinate in public and asked for his identification.

After Mosley denied that he urinated in public, Tambrini conducted what the lawsuit calls a “sham field investigation” during which Mosley was subjected to “a willful and wanton display of outrageously inhuman cruelty.”

Tambrini first asked Mosley to take his finger and touch a “little puddle of water” beside his car that he claimed was urine, the video shows. After Mosley obliged, Tambrini replied, “Now lick it.”

“Who’s gonna lick dirt?” Mosley replied, visibly upset. “You think ‘cause I’m black I’m gonna sit here and touch some dirt, then lick it?” Mosley then requested that the officer call a supervisor to the scene because he had a problem with how he was being treated.

When Tambrini told Mosley he was going to write him tickets for parking illegally and urinating in public, Mosley declined to provide him his name and information and repeatedly asked that a supervisor be dispatched to the scene, according to the video.

Eventually, Tambrini said he was going to have to arrest Mosley for obstructing identification and “needlessly escalated the situation by drawing, pointing, and shooting a Taser” at Mosley, according to the suit.