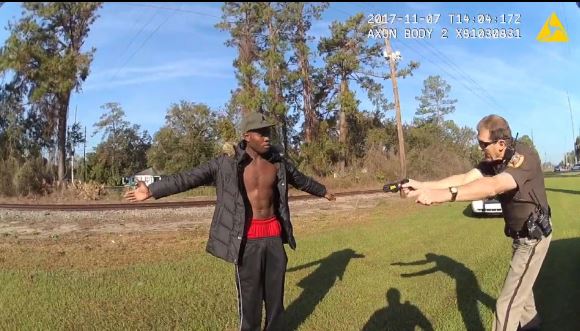 A disturbing video has show police officers harassing Ahmaud Arbery by trying to taser him for just for sitting in his car two years before he was murdered by a White father and son.

That was the type of society Arbery grew up to his family lawyers said. He was constantly bullied, monitored and harassed by White police officers and neighbors who had made up in their minds that he was up to no good before he was later hunted down and killed by two White men.

In a report by Sun UK, the Glynn County Police Department was criticized by the public after it took them more than two months to arrest Gregory and Travis McMichael for murder.

We revealed last night how Travis’s sister Lindsay posted a photo of Ahmaud’s blood-soaked body on Snapchat on the day of the shooting in February.

Now police bodycam footage obtained by The Guardian through a public records request shows Ahmaud being frisked by cops just over two years before his death in November 2017.

Officer Michael Kanago demands to know why he was sitting alone in his car in a park.

He hands over his license and asks why the officer is “f***ing with me for?”.

Officer Kanago tells him: “I’ll tell you why I’m here, because this area is known for drug activity.”

Ahmaud is frisked and found to be unarmed, then refuses to let the cop search his car.

He protests he is simply relaxing by rapping over a backing track on his only day off from his job at the Blue Beacon Truck Wash.

A second officer, David Haney, arrives minutes later and screams at Ahmaud to get his hands out of his pockets.

He complies with the order and holds out his arms, but then Haney raises a Taser stun gun and tries to shock him.

“Warning! Down!” the officer yells as the malfunctioning device fails to deploy.
Ahmaud is ordered to the ground, and continues to complain about his treatment.

He says: “I get one day off a week. I’m up early in the morning trying to chill.

“I’m just so aggravated because I work hard, six days a week.”

Ahmaud was eventually allowed to go but told not to drive as his license had expired.

Officer Kanaga later wrote in a report he called for backup because “veins were popping from his chest, which made me feel that he was becoming enraged and may turn physically violent towards me”.

Lawyers working for the Arbery family said the video clearly showed “a situation where Ahmaud was harassed by Glynn county police officers”.

There was “no justifiable reason” for him to be threatened with a taser, a statement said.

It added: “This appears to be just a glimpse into the kind of scrutiny Ahmaud Arbery faced not only by this police department, but ultimately regular citizens like the McMichaels and their posse, pretending to be police officers.”

The lawyers have been engaged by Ahmaud’s family after leaked video showed the moment the McMichaels chased down the black jogger in Brunswick on February 23.

They engaged him in a struggle then killed him with a shotgun.

But they faced no charges at the time after a local prosecutor who had worked with former law enforcement officer Gregory said the killing was justified.

McMichael, 64, and son Travis, 34, were arrested on May 7 and now face a murder trial after the case came to global attention.

Donald Trump called the video “very disturbing” and the mayor of Atlanta called it a “lynching”.

Ahmaud’s father says he was “hunted like an animal”.
The McMichaels have said they pursued him because they believed he matched the description of a burglar wanted for break-ins in the area.

Gregory has also claimed that Ahmaud attacked Travis before the gun was fired.

A judge from outside the district has been brought in to oversee their trial.

Last night we told how Gregory’s daughter Lindsay posted a bloody photo of the killing scene on Snapchat.

She told The Sun Online there was no malicious intent and it was only because she is a “true crime fan”.