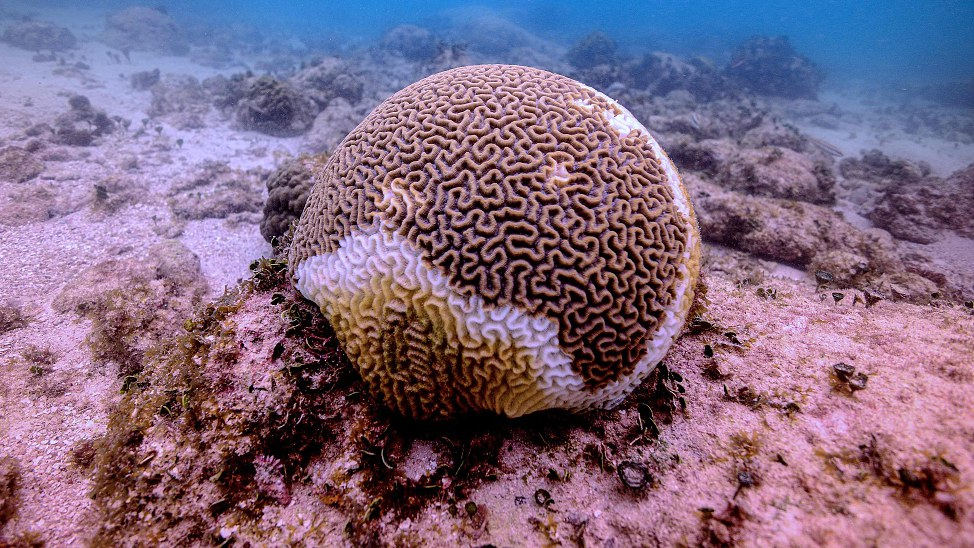 A virulent and fast-moving coral disease that has swept through the Caribbean could be linked to waste or ballast water from ships, according to research.

The deadly infection, known as stony coral tissue loss disease (SCTLD), was first identified in Florida in 2014, and has since moved through the region, causing great concern among scientists.

It spreads faster than most coral diseases and has an unusually high mortality rate among the species most susceptible to it, making it potentially the most deadly disease ever to affect corals. More than 30 species of coral are susceptible. It was found in Jamaica in 2018, then in the Mexican Caribbean, Sint Maarten and the Bahamas, and has since been detected in 18 other countries.

In Mexico, more than 40% of reefs in one study had at least 10% of coral infected by SCTLD, and nearly a quarter had more than 30%. In Florida, regional declines in coral density approached 30% and live tissue loss was upward of 60%.

Scientists have not yet been able to determine whether the disease is caused by a virus, a bacteria, a chemical or some other infectious agent, but the peer-reviewed study in the journal Frontiers in Marine Science supports the theory that ballast water from ships may be involved. Conducted in the Bahamas by scientists at the Perry Institute for Marine Science, it found that SCTLD was more prevalent in reefs that were closer to the Bahamas’ main commercial ports, in Nassau and Grand Bahama, suggesting a likely link between the disease and ships.

Judith Lang, scientific director at the Atlantic and Gulf Rapid Reef Assessment project, which has been tracking the disease, said: “The prevailing currents in the Caribbean push seawater to Florida and not in the reverse direction, and the predominant wind direction is westward. So human dispersal [to those three territories] in 2018 seems necessary.”

In 2017, the spread of deadly pathogens by ships when they discharge ballast water prompted the International Maritime Organization to implement the Ballast Water Management Convention, which requires that ships discharge their ballast water – used to maintain the ship’s stability – 200 nautical miles from shore in water at least 200 metres deep before entering port, to ensure they do not bring in harmful foreign pathogens.

In the Bahamas, SCTLD has spread rapidly since first being identified in December 2019.

Krista Sherman, senior scientist at the Perry Institute and a co-author of the recently published paper, said: “The disease is spread along about 75km of reef tract, about 46 miles – so for Grand Bahama that is a large structure of reef. We’re talking about mostly covering the entire southern coastline of the island.”

The disease is also widespread in the coral reefs of New Providence, where the Bahamas’ capital, Nassau, and main port are located. The study notes the presence of international container ships, cruise ships and pleasure boats at that location, as well as a fuel shipping station.

Infection rates among the most susceptible species were 23% and 45% across New Providence and Grand Bahama respectively, and recent mortality rates have reached almost 43%.

With the exception of two species, the researchers found “there was a significant relationship” between the disease and proximity of reefs to the major shipping ports. They noted “an increasing proportion of healthy colonies as distance from the port increased on both islands, and a greater proportion of recently dead colonies closer to the port than farther away”.

The locations where SCTLD is prevalent in the Bahamas are all popular with tourists, recreational fishers and divers, Sherman said.

There are concerns that the coral disease could affect the country’s main fishery export, spiny lobster, said Adrian LaRoda, president of the Bahamas Commercial Fishers Alliance. Although the lobster fishers work further out to sea, the industry would be affected if the reefs die. The spiny lobster fishery brings in $90m (£66m) a year and employs 9,000 people.

“Any negative impact on our reefs would definitely drastically affect our spiny lobsters because the mature animals migrate [from the reefs] to the fish aggregating devices [a technique for catching fish],” LaRoda said. He added that the lobsters’ reproduction rate and the food supply for juvenile lobsters in the reef would also be affected.

The Bahamian government has set up a national taskforce to tackle the problem. Currently, the most effective treatment for the disease is the application of the antibiotic amoxicillin directly to the corals, which has seen some success in reducing mortality, but no realistic permanent solution is available.

According to Lang, rather than treating the symptoms, there is a need to tackle the possible human-made causes. “Given a chance, nature can heal naturally,” she said.

Published in Americas, NatureWatch, Oceania & the Caribbean, Water and World