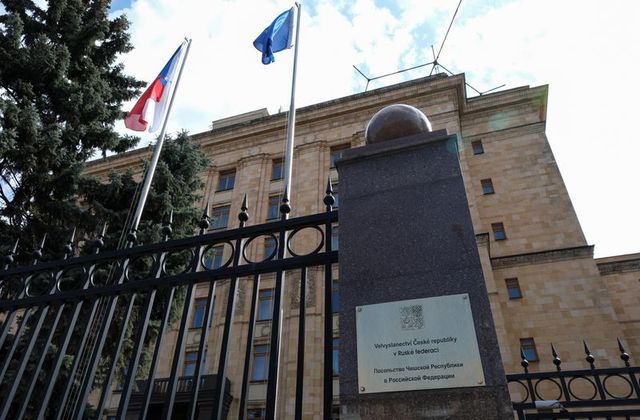 The European Union is set to discuss the Czech Republic’s damning allegations that two Russian agents accused of a nerve agent poisoning in Britain in 2018 were behind an earlier explosion at a Czech ammunition depot that killed two people.

Moscow gave the Czech diplomats just a day to leave, while Prague had given the Russians 48 hours.

The central European country is a NATO and EU member state, and the expulsions and allegations have triggered its biggest row with Russia since the end of the communist era in 1989.

It also adds to growing tensions between Russia and the West in general, raised in part by Russia’s military build-up on its Western borders and in Crimea, which Moscow annexed from Ukraine in 2014, after a surge in fighting between government and pro-Russian forces in Ukraine’s east.

Czech Prime Minister Andrej Babis said in a briefing shown live on television that there was “well-grounded suspicion about the involvement of officers of the Russian intelligence service GRU… in the explosion of an ammunitions depot in the Vrbetice area.”

The October 16, 2014 explosion in Vrbetice set off 50 metric tons of stored ammunition, killing two employees of a private company that was renting the site from a military organization. Two months later, another blast of 13 tons of ammunition occurred at the same site.

The U.S. embassy in Prague said on Twitter that Washington “stands with its steadfast ally, the Czech Republic. We appreciate their significant action to impose costs on Russia for its dangerous actions on Czech soil.”

Russia accuses Czech of trying to please the U.S.

Babis had described the explosion as “unprecedented and scandalous”, but Russia said Prague’s accusations were absurd as it had previously blamed the blast at Vrbetice, 300 km (210 miles) east of the capital, on the depot’s owners.

It called the expulsions “the continuation of a series of anti-Russian actions undertaken by the Czech Republic in recent years”, accusing Prague of “striving to please the United States against the backdrop of recent U.S. sanctions against Russia”.

“This hostile move was the continuation of a series of anti-Russian actions undertaken by the Czech Republic in recent years. It’s hard not to see the American trace [here],” Russia’s Foreign Ministry said.

Last week, the United States row with Russia hit boiling point as Moscow was slapped with major new sanctions by the U.S., leading to the expulsion of 10 of its diplomats over alleged election interference, cyberattacks, and other perceived hostile activities. Russia responded by ordering a raft of measures and telling an equal number of U.S. diplomats to leave.

Russia’s unit 29155 identified by Babis has been linked to a series of attempted assassination plots and other sabotage across Europe, including the 2018 poisoning of Sergei Skripal in the English city of Salisbury.

Skripal, a former Russian military intelligence officer, and his daughter Yulia, nearly died after being exposed to what British authorities later concluded was Novichok, a military-grade nerve agent. A British woman who accidentally came into contact with the substance died.

Britain’s NATO allies responded to the Skripal poisoning by imposing sanctions on Russia and expelling diplomats.

While the government unveiled its case, Czech police announced they were seeking two suspected Russian agents carrying various passports, including Russian documents in the names of Aleksandr Petrov and Ruslan Boshirov.

The names match those of the two men whom Britain has blamed for the Skripal poisonings.

The explosion an attack on a Bulgarian shipment

Czech Prime Minister Andrej Babis said the attack had been aimed at a shipment to a Bulgarian arms trader.

“This was an attack on ammunition that had already been paid for and was being stored for a Bulgarian arms trader,” he said on Czech Television.

He said the arms trader, whom he did not name, had later been the target of an attempted murder.

Bulgarian prosecutors charged three Russian men in 2020 with an attempt to kill arms trader Emilian Gebrev, who was identified by Czech media as the same individual.

British Foreign Secretary Dominic Raab tweeted that the Czechs “have exposed the lengths that the GRU will go to in their attempts to conduct dangerous and malign operations”.

A NATO official said the alliance would support the Czech Republic as it investigated Russia’s “malign activities”, which were part of a pattern of “dangerous behaviour”.

“Those responsible must be brought to justice,” added the official, who declined to be named.

The United States, Britain, NATO, and the EU threw their support behind the Czech decision and pledged their support.