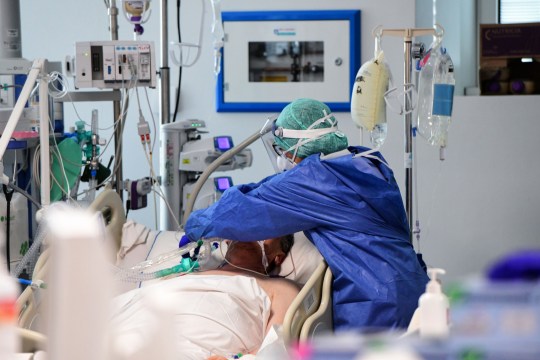 An experimental drug designed to treat Ebola patients has helped multiple people, including a 79-year-old man in Italy, recover from coronavirus.

According to Metro UK, the elderly man from Lombardy, a region in the north of Italy which has been one of the worst-affected areas in the country, has been treated with a drug called remdesivir.

The drug, which was developed by US company Gilead, was initially aimed for use against Ebola. After extensive tests on animals were positive, the drug proved to be less effective in preventing human deaths.

But doctors at San Martino Hospital in Genoa where the man was treated for 12 days have been buoyed by the latest breakthrough by using remdesivir to treat coronavirus. Professor Matteo Bassetti, director of the infectious disease clinic at the hospital, said: ‘We have the first truly healed, two swabs he was given were both negative.’

Remdesivir is now being tested in several clinical trials across the United States, with doctors claiming that the drug stops the production of the virus in the body. Chinese scientists have also observed that the drug could help with slowing down the symptoms following clinical trials in Wuhan. During his press conference on Thursday, Donald Trump confirmed that remdesivir was one of the drugs which could potentially be fast-tracked to Covid-19 patients following the outbreak in the United States. Chris Kane, 55, who fell ill following a business trip to Florida in February, ‌explained how he was given remdesivir by doctors after displaying severe symptoms. ‘A couple weeks ago, I got home from work, and all of a sudden I started running a really, really high fever. I started coughing,’ he told Washington-based radio station KIRO Radio.

‘I honestly felt like an elephant or something was stepping on my chest. ‘I was in a bed in a bad enough space at the time, saying, ‘Sure, you know what? Let’s try something here.’ ‘And I’m super blessed that they did what they did, and I was certainly in a great space to be at a hospital with the infectious disease doctor who knew about this and was able to give me a treatment.’

During a press conference in China last month, Bruce Aylward, a senior advisor for the World Health Organization, also raised the possibility of remdesivir being used as treatment for Covid-19. ‘There’s only one drug right now that we think may have real efficacy. And that’s remdesivir,’ he said.

Published in Americas and Europe