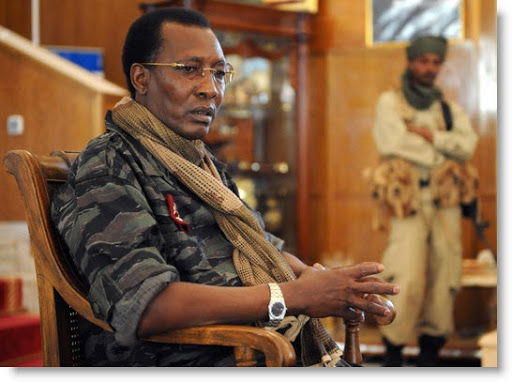 Coronation, Not An Election In Chad

After 30 years in power, Chad’s brutal ruler Idris Déby Itno is just coming into his own.  With elections on April 11 in his oil rich, yet crushingly impoverished country, he is offering a masterclass in how to not just win an election but crush an opposition, dispirit a population, and seduce foreign backers so completely that his tenure as president is assured for years to come.

The former army chief to Chad’s even more notorious strongman, Hissène Habré – himself currently serving a life sentence for crimes against humanity, war crimes, and torture – Déby overthrew his mentor in 1990, with the support of France, promising “to bring neither gold nor silver, but freedom and democracy” to Chad.

But next week’s elections – the sixth since Déby took power – will offer nothing of the sort for the country of 16 million, that ranks 187 out of 189 countries on the UN’s Human Development Index.

When the truncated campaign season kicked off in February, 16 opposition candidates declared their intention to contest Déby’s stranglehold on power.  They were supported by mass popular protests opposing a sixth Déby term under banners like “Free Chad” and “Leave, Deby.”

Demonstrations buoyed by momentous events in neighboring Sudan were met with a crackdown on protesters and opposition candidates.

And they were buoyed by momentous events of the last two years in neighboring Sudan, which through its own popular uprising saw the 30-year dictatorship of Omar al-Bashir finally end with his ouster by the military. Sudan’s affable Prime Minister, Abdallah Hamdok, has expressed his hope that his country’s transition to a hopeful new era of civilian, if not democratic, rule can serve as a model to the region.

But Chad is instead hewing to the model set by long-time contemporaries in Cameroon and Republic of Congo of ‘Big Man’ rule.  And today, the country’s ramshackle capital looks more like it is about to host a coronation than an election.

With several hundred protesters already in detention, along with a prominent journalist for covering the protests, further protest gatherings and opposition campaign rallies have been banned during the campaign period under a national security directive that Amnesty International described as “unnecessary and disproportionate restrictions” on the right of assembly. And with only Déby’s ruling Patriotic Salvation Movement allowed to post campaign posters, the streets of Ndjamena bear a tense and unsettling resemblance to Tripoli under Mohammar Qadaffi, with portraits of only the 69-year-old autocrat adorning most street corners.

Stacking the decks even further, a 2018 constitutional amendment helped reset the clock on Deby’s 30-year rule giving him another 12 years in office after his impending victory. The constitutional coup also helped prevent one of his main opponents, the 38-year-old former World Bank economist Succès Masra, from running by raising the presidential age limit from 35 to 40 years.  Meanwhile, Déby’s Supreme Court threw out the candidacies of seven other candidates on a variety of technical grounds.

But the most brazen warning to Déby’s remaining contenders came in late February when the President’s U.S. and French-trained and equipped Presidential Guard, commanded by Déby’s son, surrounded the home of opposition candidate Yayha Dillo with tanks and heavy weapons to arrest him on charges of “opposing the authority of the state.” In the shootout that ensued, Dillo, who escaped arrest and is now in hiding, reported that his mother, son, and three supporters were killed.

The very next day, Chad’s main opposition politician and only remaining candidate capable of seriously challenging Déby, Saleh Kebzabo, withdrew from the race citing, “the obvious militarization of the political climate.”

Déby’s external backers, Paris and Washington chief among them, face an choice between a continued alliance with an autocract or support for democrat aspirations.

With only a handful of candidates remaining and most of the other opposition parties calling for a boycott of the vote so as to not “provide cover for a large-scale masquerade,” Déby is hoping that what is left of this multiparty race delivers him a knockout vote in the first round that would thwart any opposition to his rule for years to come.

But to Deby’s external backers, Paris and Washington chief among them, the message he hopes is received is one of another high-living autocrat, Louis XVI, who famously promised, “après moi, le deluge.”

For all of the Biden Administration’s soaring rhetoric about “joining with like-minded allies and partners to revitalize democracy the world over,” Chad stands out as one of the glaring challenges to that lofty ambition – a place where Western interests routinely outweigh our values to pernicious effect.

Playing host to the 5,100-man strong Opération Barkhane, that since 2013 has deployed across the Sahel to counter the region’s mounting jihadist threat, Déby has deftly positioned himself as the most capable local partner and remaining bulwark against a terror caliphate that could extend from the Red Sea to the Atlantic.

So close are relations that in 2019 – when Déby was threatened by his own internal rebellion from inside Chad’s expansive northern border with Libya – it was French President Macron, who dispatched French fighter jets from their long-time base in N’Djamena to neutralize the threat and preserve Déby’s hold on power. A headline in the newspaper Le Monde noted it made “Paris appear as the protector of a predatory and corrupt regime.”

Respecting the symbiotic nature of relations, Déby pledged at the most recent G5 Sahel Summit to increase his own military’s commitment by 1200 troops to the anti-Islamist fight in his own backyard, helping to shore up the military response in light of political re-evaluations going on in both Paris and Washington over the nature and duration of their now-8-year and increasingly expensive and unpopular anti-terror operation.

But beyond preserving their mutual security interests by combating the regional terrorist threat, neither Paris nor Washington seems to have a vision for what Chad could and should be going forward, while Déby’s priorities seem limited to ensuring his hold on power and the protection of his family and financial interests.

In the meantime, while Chad’s elite forces defend Western interests across the region, at home they repress democratic voices demanding change.  It is this ambiguity that Déby and ‘big men’ like him rely on, and indeed thrive in.  However, Western audiences should view that ambiguity for what it really is, hypocrisy.

Biden’s interim national security strategy acknowledges this dilemma. “There are those who argue that, given all the challenges we face, autocracy is the best way forward,” the President says in the 24-page guidance document issued last month. “I firmly believe that democracy holds the key to freedom, prosperity, peace, and dignity.”

This is what the people of Chad have been denied for most of their history, and it is what a renewed commitment to democratic values can offer.  Chad’s election presents an important opportunity to demonstrate that choice.

Cameron Hudson is a senior fellow at the Atlantic Council’s Africa Center. Previously he served as the chief of staff to the special envoy for Sudan and as director for African Affairs on the National Security Council in the George W. Bush administration. Follow him on Twitter @_hudsonc.