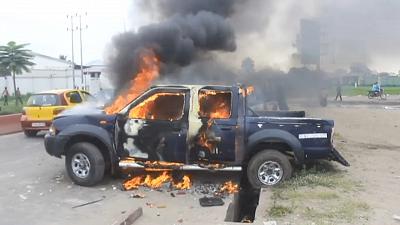 A clash over the right to use the Martyrs’ Stadium in Kinshasa on Thursday by two rival Muslim groups, led to the death of a policeman at the end of the holy month of Ramadan.

“Unfortunately, there were extremists on both sides who did not want reconciliation and to pray together. They threw projectiles, they violently attacked the police. We mourn the death of a police officer today.”

The official added that 40 people were hurt, 35 arrested and a police vehicle was burned outside the stadium — amid the fighting that replaced the true spirit of the traditionally peaceful Eid Al Fitr celebrations.

Local Muslims who had turned up for the spiritual celebration were appalled by the turn of events.

“It’s a pity, we have done a month of Ramadan to come here to see these scenes of street guerrilla warfare like this. It’s a shame.”

The conflict’s roots lie in a years-long dispute between two rival factions over leadership of the Comico Muslim federation in the Democratic Republic of Congo, Africanews reports.

“Although leaders of the two rival wings of the Muslim community had guaranteed to the governor of Kinshasa that they would celebrate the end of Ramadan together, unfortunately, a policeman was killed in clashes,” spokesman Charles Mbutamuntu said.

Around 10% of the DRC’s population is Muslim and the people are most concentrated in the country’s eastern region.