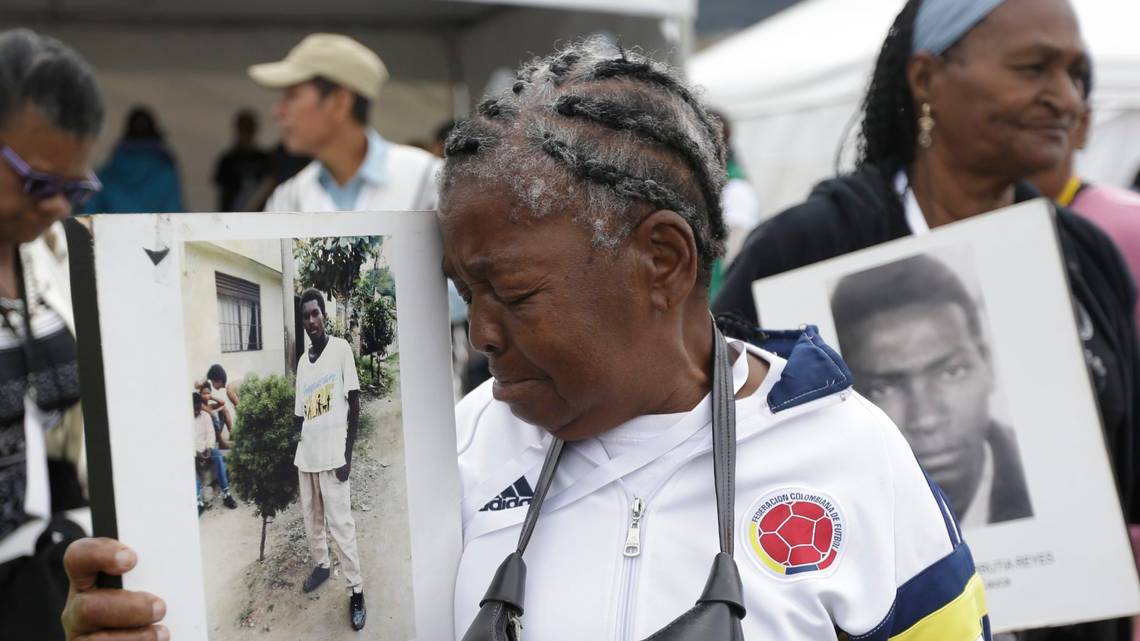 Colombia Is Systematically Killing Off Its Black Citizens

“This is where the bodies lay,” the Afro Colombian activists casually pointed to a spot outside the window as the tiny car that we were crammed in darted expertly in and out of 11 p.m. traffic in Cali, Colombia.

Cali is where many displaced Afro Colombians have sought refuge from the Colombian civil war, often only to find that they’ve fled one kind of terror only to encounter another. Rather than your typical tourist sites, they pointed out the places where black people have been killed, black communities displaced and the endless civil war has rendered black life inconsequential and disposable.

Originally from a rural black community outside of Tumaco, Colombia near the border with Ecuador, Quiñones, the activists had survived threats and persecution from the largest guerrilla group in Colombia, the Revolutionary Armed Forces of Colombia (FARC), only to be detained, tortured and imprisoned for over a year by Colombian security forces for their activism against illicit activities destroying their community.

When we met, they’d only been released three months earlier and couldn’t return to Tumaco, now the biggest producer of coca in Colombia. Consequently, the region now has a murder rate four times the national average, the highest rate of sexual violence in the nation and least 2,700 people displaced by violence in 2019 alone. Thus, as we drive through the city, my guide talked about the urban facades that masked unimaginable cruelty and violence with the heartbreaking detachment of a survivor of war, forever changed by what she’d seen.

During the nine days I spent in Colombia on an international solidarity trip organized by the groups AfroResistance and Proceso de Comunidades Negras, I encountered many such stories of quotidian violence and resistance from Afro-Colombian activists. It became painfully clear that the much-lauded Colombian Peace Deal signed between the government and the FARC had failed to bring peace to Afro-Colombian communities. Instead, the peace deal has become the backdrop to the ongoing ethnic cleansing they face.

It was the 6 million hectares of territory that Afro-Colombian supposedly gained on the Pacific Coast and in rural areas in Constitutional Law 70 in 1993 that brought the civil war to their doorstep. Suddenly, Afro Colombians’ ancestral territories where the FARC had been cultivating coca became the battleground for the war’s bloodiest fights to control the illicit drug trade.

“The Autodefensas Unidas de Colombia, an alliance between paramilitary groups, became interested in the land, resources and waterways along the Pacific Coast at the same time that the government realized that it was a biodiverse, resource-rich region and the state began to militarize it to gain access to those resources too,” said Roosbelinda Cárdenas, a cultural anthropologist and assistant professor of Latin American studies at Hampshire College. “When that happened, the war came to those areas and you started seeing massacres, kidnappings and displacement.”

“The first mass displacement was in 1996, the same year the first land titles were granted to Afro Colombians, ” Cardenas said. “When I began working with Asociación Nacional de Afrocolombianos Desplazados (Afrodes) 15 years ago, [they] were calling this a genocide.”

The displacement and violence in Afro-Colombian territories only accelerated when the 2012 U.S.-Colombia trade agreement brought investments focused on industrial agriculture, infrastructure and large-scale mining. Afro Colombians have been left with few choices as their way of life has been destroyed: Either join the war as guerrilla combatants to feed their families, risk death by resisting outside encroachment, work in conditions little better than indentured servitude or flee.

Despite the disproportionate victimization of Afro Colombians, the Colombian government largely left them out of the four-year peace process. In exchange for the FARC laying down its arms, Colombia declared that its five-decade-long civil war was over in 2016. However, the process was flawed from the onset, leaving out civil society, communities, ethnic minorities and even the other of armed groups that have been responsible for 80 percent of the killings in Colombia.

“For us, the peace process is a matter of life or death. But for the government, it’s just to create the economic conditions for investments,” said Charo Mina-Rojas a member of Proceso de Comunidades Negras (PCN), “And we see the consequences . . . since the process didn’t include us in its negotiation, it continued to neglect us in the implementation.”

Since the peace deal was signed, at least 566 activists and community leaders have been killed, and coca production is at an all-time high in Colombia. Without the promised peace, Afro Colombians face insidious forms of violence that extend beyond the initial impacts of the war, including state abandonment that has 80 percent of them living in poverty, police violence that kills their young boys, rapes that destroy the social fabrics of their communities, forcibly recruiting their men and boys into armed groups, multilateral development banks pushing a neoliberal economic development projects that exclude them, the state reintegrating the same guerrilla fighters who had terrorized them into their communities while millions are still displaced, violent alliances between new and old paramilitary groups, persecution from corporations and criminal organizations encroaching on their territory, and 3 million of them suddenly wiped off the census.

The impact was felt in every black community I visited during the delegation. The violence I heard about in Colombia left me with nightmares. In Yolombo, community leaders opposed to the environmental damage caused by multinational corporations mining in their territory were threatened with “extermination” after a failed assassination attempt. In Buenaventura, massacres, torture, rape and disappearances attempt to force black residents from the waterfront areas where they have lived for generations, so the government, World Bank, and developers can expand the port and attract tourism.

Despite the investments pouring in, many of these communities lacked potable water, schools, and hospitals. “We’ve concluded-as the government and other groups have stated when they threaten us- we [Afro Colombians] are “in the way” of development,” said Mina-Rojas, “What’s clear to us is that the war against black people has become strategic and organized.”

“There are many ways to kill us,” agreed her PCN colleague Sofia Garzon, “It’s a white supremacist project that ultimately says that we don’t have the right to [exist]. That’s why it’s not important if there are no schools, that we have no gas or water, or that the education we receive is mediocre. We are disposable yet at the same time, it’s from our bodies and our lands that they extract their wealth…ethnic cleansing takes many forms.”

Until its regional partners stop ignoring the exploitation and violence against Black people that has defined Colombia for centuries, Colombia will continue to pursue the goal of being a country with black food, black music and black dance to attract tourism and investments.

But without black people.

France Francois is a Miami writer and activist who has worked in international development throughout Latin America and the Caribbean.