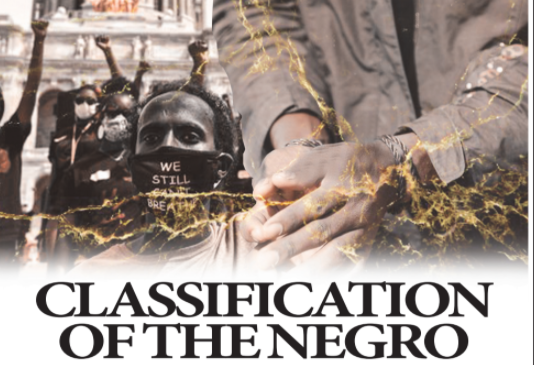 Classification Of The Negro: Person Or Property?

You were born with a label that you take for granted these days. Today, you are “John’s son,” or “Ella’s daughter,” but for those who were born generations before you, many were born as “Property of Slave Owners.”

It hurts- doesn’t it – when it is put in front of your face like that.

For generations, the AFRICANS – NEGROES – BLACKS – COLOREDS – AFRICAN AMERICAN, have been classified, re-classified and re-classified again in terms of “what to call them” and more disturbingly, “WHO they BELONGED to.”

It came down to skin color, blood and money.

The American Constitution does not mention slavery until 1865, with the adoption of the Thirteenth Amendment, which abolished the institution. Yet the Constitution, written in 1787, is riddled with provisions tied to slavery which protected it without naming it.

The colonial lawmakers had to develop rules to balance the tension between treating Africans and others as persons held to labor and as property owned by other people.

The first Africans in Virginia were treated as indentured servants, held for a term of years, and then eligible for freedom. The earliest legal records of Virginia illustrate a confusing process. Some Africans were held in lifetime servitude; while others were set free.

As time evolved, PURE GREED kicked in and slave owners were determined to keep those FREE LABOR slaves and BREED as many as possible to save money from having to buy them and fulfill their lust of innocent African women.

SLAVE WOMEN AND THEIR CHILDREN

Virginia legislators began trying to determine how to classify the offspring of white men and African women. Under English common law a child, even one born out of wedlock, followed the status of the father. If this rule applied in the children of slaves, then the mixed-race children of slave women would be born as free people. This would lead to the situation of slave mothers raising their free-born children, while also creating a class of free mixed-race people.

The leadership in Virginia was troubled by both possibilities. In addition, since these slave women would not have been legally married to the fathers of their children, their mixed-race children would have been legally bastards. Under existing law, the Overseers of the Poor were obligated to help raise and educate all illegitimate children. Furthermore, authorities were obligated to track down the fathers of all bastard children, to make sure they supported them. Applying these rules to the mixed-race children of slave women would lead to huge social problems, as masters—and leaders of the community—might be prosecuted for illicit (and sometimes adulterous) sex with their own slaves.

On the other hand, if the colony abandoned the common law, and instead adopted the Roman law rule of partus sequitur ventrem, these problems would disappear. This was the legal rule applied to livestock and other domestic animals: that the offspring of a domestic animal belonged to the owner of the female who gave birth.

Treating slave women as property and reducing their status to that of domestic animals resolved some tough legal issues, and at the same time had the added virtue—if the word applies here—of benefiting white men, who could now freely prey on slave women without fear of legal consequences.

Any children resulting from such encounters would be slaves, belonging to the owner of the mother.

Thomas Jefferson is widely believed to have fathered the six mixed-race children with his slave Sally Hemings, who was herself three-quarters white. Four of these children, who were seven-eighths white, survived to adulthood. Hemings was a half-sister of Martha Wayles Jefferson. Their children were born into slavery because of her status; as they were seven-eighths European in ancestry, they were legally white under Virginia law of the time. Jefferson allowed the two oldest to escape in 1822 (freeing them legally was a public action he elected to avoid because he would have had to gain permission from the state legislature); the two youngest he freed in his 1826 will. Three of the four entered white society as adults, and all their descendants identified as white.

INFLUENCE OF THE REVOLUTION

The American Revolution forced many Americans to rethink the status of slaves.

entitled to the ‘rights’ of ‘Life, Liberty, and the pursuit of Happiness.’ During and

immediately after the Revolution Massachusetts and New Hampshire abolished

slavery, while Pennsylvania, Rhode Island, and Connecticut passed gradual abolition laws that would lead to an end to slavery in a generation.

Most Southern whites, however, were increasingly dependent on slavery and deeply convinced of its morality and its necessity.

Throughout the Revolution, southern politicians argued that slaves were property, not persons. At the end of July 1776, just weeks after the Continental Congress agreed to the Declaration of Independence, the delegates debated how to allocate taxes to support the new government. The plan was for each state to send taxes to the national government based on its population. A central issue in this debate was whether to count slaves as well as free people when allocating these taxes. Northerners insisted that slaves contributed to the economy just like free people, and thus should be counted when assessing taxes. Southerners rejected this idea.

WHICH ‘BOX’ TO CHECK …AND THE ONE-DROP RULE

Trying to classify Blacks was even a problem for the Census. In 1910, For census purposes, the term ‘‘black’’ includes all persons who are evidently full-blooded negroes, while the term ‘‘mulatto’’ includes all other persons having some proportion or perceptible trace of negro blood. Census takers were left sometimes to task a person’s race or color, documenting “B” for Black and “Mu” for Mulatto.

The one-drop rule is a social and legal principle of racial classification that was historically prominent in the United States in the 20th century. It asserted that any person with even one ancestor of black ancestry (“one drop” of black blood) is considered black (Negro or colored in historical terms).

The point is – it doesn’t’ t matter if you have if you have one or 1,000 drops of black blood coursing through your veins, to America, you are an AFRICAN – NEGRO – COLORED – BLACK – AFRICAN AMERICAN and many feel as if they OWN YOU…so how do you remain FREE?

NEVER BE SILENCED… KEEP FIGHTING…PURCHASE PROPERTY (not people) and VOTE EARLY – BECAUSE YOUR LIFE DEPENDS ON IT!

Additional references: Slavery in the United States by Paul Finkelman and Wikipedia