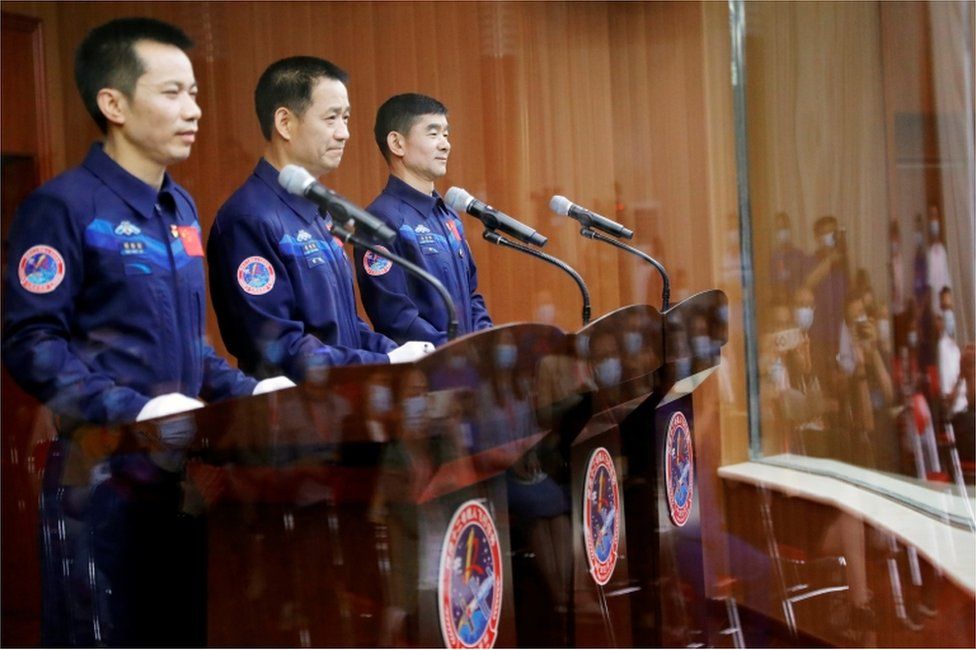 They are due to stay for three months in the station’s main living module, named Tianhe, or Heavenly Harmony.

Their assignment will include carrying out science experiments and maintenance, spacewalks and preparing the facility to receive two additional modules next year.

The three men – Nie Haisheng, Liu Boming and Tang Hongbo – are to spend three months aboard the Tianhe module some 380km (236 miles) above the Earth.

The crew successfully docked with the space station just over seven hours after the launch.

The mission was met with raucous applause from mission control in China.

The three gave final waves to a crowd of people waving flags, then entered the elevator to take them to the spaceship at the Jiuquan launch centre in northwestern China.

Their Shenzhou-12 capsule took off atop its Long March 2F rocket on Thursday.

Lift-off from the Jiuquan satellite launch centre in the Gobi desert was at 09:22 Beijing time (01:22 GMT).

The launch and subsequent mission are another demonstration of China’s growing confidence and capability in the space domain.

In the past six months, the country has returned rock and soil samples to Earth from the surface of the Moon, and landed a six-wheeled robot on Mars – both highly complex and challenging endeavours.

China is not a participant in the International Space Station, largely as a result of US objections to the Chinese program’s secrecy and close military ties. However, China has been stepping up cooperation with Russia and a host of other countries.

China landed a probe on Mars last month that carried a rover, the Zhurong, and earlier landed a probe and rover on the moon’s less explored far side and brought back the first lunar samples by any country’s space program since the 1970s.

While China concedes it arrived late at the space station game, it says its facility is cutting-edge. It could also outlast the International Space Station, which is nearing the end of its functional lifespan.

With Thursday’s launch, China has now sent 14 astronauts into space since it first achieved the feat in 2003, becoming the third country after the former Soviet Union and the US to do so.