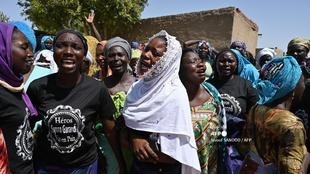 Chad’s military has killed at least five people in a brutal move to foist the protest against the transitional military government staged by the opposition.

The military junta headed by the youthful general and son of Late President Deby responded to the peaceful democracy protest with teargas and live ammunition, leaving dead bodies on the street.

Yvonne Nour is in mourning as her son Adoussama Balam was one of those killed by the Chadian security forces at the demonstration.

Adoussama’s parents say he was unarmed and only wanted to see good governance in Chad.

“He left with bare hands, why did they kill him with a gun? Why? He had nothing on him,” asked Nour as about a dozen women sat around her with their heads bowed.

“I say he’s a martyr because when he signed up he didn’t know what was waiting for him. He was fighting for a noble cause,” said Joslin Loumvadi Ponga, the victim’s uncle.

“He wanted Chad to be democratic and that’s what they promised us from the beginning, but that’s not what we’re experiencing. What they said is different from reality. We want things to change. If he fought, it was to bring about change in Chad,” he added.

The African Union (AU) are mounting pressure on the transitional military government to swiftly hand over to a civilian democratic rule.