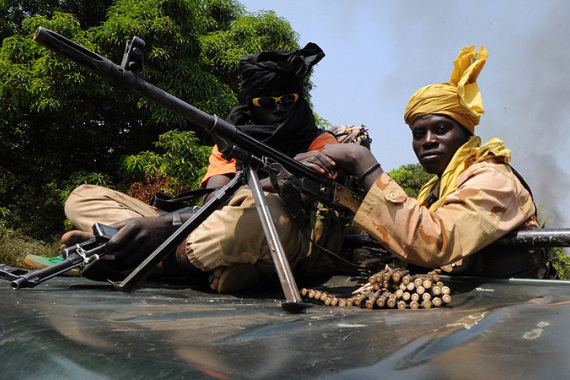 Rebels in the Central African Republic vowed to step up attacks over support they say the government is getting from Russia in return for resources in the diamond-rich country, fueling fears of a return to full-blown conflict in one of the world’s least developed countries.

A loose alliance of six rebel groups called the Coalition of Patriots for Change ambushed the capital, Bangui, last week, firing rocket-propelled grenades at foreign forces. The first such attack on the capital since President Faustin-Archange Touadera took office in 2016 came barely two weeks after elections in which he won a second term.

The attack was meant as a warning to Touadera’s government to stop the “organized pillaging by Russian mercenaries,” Abakar Sabone, a military spokesman for the alliance and former tourism minister, said by phone from Chad. “If Touadera wants peace we’re ready, and if he wants war we’re equally ready,” he said.

The rebels dominate roughly two-thirds of the territory, with state authorities having lost control of most rural areas since the ouster of President Francois Bozize in 2013. Bozize was barred from standing in the Dec. 27 presidential vote by the Constitutional Court because of allegations of abuse under his rule.

The court confirmed on Monday that Touadera won the election with 53% of the votes.

The Central African Republic is one of Moscow’s closest allies in Africa. Touadera is supported by Russian mercenaries from the Wagner Group, headed by a confidante of President Vladimir Putin, which also backs Libyan military commander Khalifa Haftar. Russia, as well as Rwanda, sent hundreds of additional troops to strengthen security alongside 12,000 United Nations peacekeepers ahead of the elections.

“Every country goes somewhere for an interest or to gain something — Russia isn’t different,” Albert Yaloke Mokpeme said by phone from Bangui. “This doesn’t mean that we have mortgaged our natural resources to the Russians. Our president speaks with Vladimir Putin and Sergei Lavrov and Russia has promised to help us and they are doing it.”

While the rebels have the political support of Bozize, the former president doesn’t head the coalition or gives instructions about military operations, Sabone said.

Touadera has struggled to revive the economy of the country that ranked 188th out of 189 nations on the UN Human Development Index last year. One-fifth of the population has been displaced or lives in refugee camps across the border. The number of refugees has doubled to almost 60,000 since Touadera’s re-election bid, the UN High Commissioner for Refugees said last week.