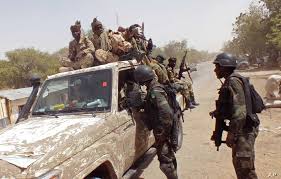 Ten-year sentences were given to four Cameroonian soldiers on Monday indicted in the killing of two women and two children in 2015, an incident that sparked international outcry, their lawyers said.

After a video of the killings circulated in 2018, which showed the victims being hooded and shot, the government initially dismissed the footage as “fake news”, but later arrested seven soldiers.

An investigation by BBC Africa Eye showed that the incident happened in a village in the far north of Cameroon. It also identified three of the soldiers who pulled the trigger.

As captured by the video, Cameroonian soldiers could be seen accusing the women of getting involved with Boko Haram, the Islamic terrorist group from Nigeria whose activities have spread across the border into Cameroon soil.

The victims, who included a baby tied to one of the women’s backs, were then marched down a dusty road, blindfolded and shot 22 times.

The trial started in January and has been conducted behind closed doors. On Monday, the court found three of the soldiers guilty of murder, while their commander Etienne Fabassou was found guilty of complicity in murder, according to his lawyer Sylvestre Mbeng.

All four were sentenced to 10 years imprisonment.

Another soldier received a two-year sentence for filming and sharing the footage of the incident. Two others were found not guilty on all counts and released, Mbeng told Reuters.

The nation was shocked when the video first came to light in 2018 but the government was quick with its denials.

Initially, when the shocking video was released, the government spokesperson said the film was shot in Mali and the uniforms shown in the footage were not ones used by soldiers in that area of Cameroon. But as the evidence mounted it became more difficult to deny.

According to the BBC, it is rare for soldiers to be convicted for the killing of civilians in Cameroon but it has happened before. Three are currently in jail over the deaths of 13 civilians in the country’s North-West region, where the army is fighting a separatist insurgency.

The soldiers’ eventual arrest and prosecution were welcomed by activists, including Amnesty International, who accuse government soldiers of repeatedly engaging in torture and extra-judicial killings in the far north.

Under Cameroonian law, some of the defendants could have faced the death penalty, although Cameroon has not executed anyone since 1997.