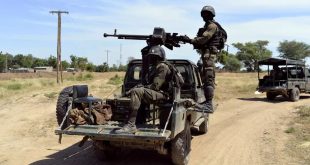 DOUALA (Reuters) – At least six Cameroonian soldiers were killed and four wounded during an attack by Islamist insurgents on an army outpost in the far north of the country, state broadcaster CRTV said on Saturday.

The attack is the deadliest in recent months in northern Cameroon, which alongside neighbouring Nigeria and Chad, has been battling the Boko Haram militant group for years and, more recently, militants linked to Islamic State.

“Our outpost in Sagme was attacked this morning around 4 a.m. local time (0300 GMT) by a horde of assailants. There were six to seven vehicles and motorcycles and some were on foot. It was a massive attack,” Lazare Ndongo Ndongo, administrative head of the district in the Far North Region, told Reuters.

State television reported the death toll on Twitter, but gave no further details about the attack.

Two military sources who requested anonymity had told Reuters that at least eight soldiers had been killed and several others were wounded.

Local authorities said there has been a steady increase in attacks on the military in the region since the death of Abubakar Shekau, the former leader of Boko Haram.

“Since Shekau’s death there has been an increase in attacks, as the Islamic State West African Province (ISWAP) move to conquer territories previously held by Boko Haram,” Ndongo said.

“They are gaining momentum. They look more structured, better organised and attack in full force,” he said.