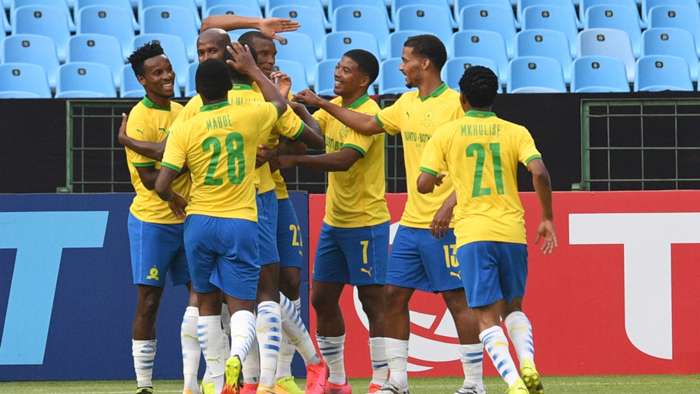 The win, earned courtesy of a brace by Themba Zwane and goals by Peter Shalulile, Lebohang Maboe and second half sub Kermit Erasmus, consolidated Downs’ lead at the summit of Group B. They now have six points, four ahead of second-placed TP Mazembe of DRC, who have played two games as well. Amir Sayoud netted the Algerian side’s goal.

The match got off to a dramatic start as Belouizdad were  reduced to 10 men when Malian referee Boubou Traore issued a straight red card to centre-back Chouaib Keddad for using his hands to block Zwane’s goal-bound effort. Zwane stepped up and converted the resultant spot-kick.

The Brazilians enjoyed more ball possession in the first half but they hardly created opportunities as Belouizdad prevented them from threatening. Sundowns were at times let down by lack of sense of urgency as they strung along too many passes.

Thapelo Morena and Lyle Lakay at right and left back respectively were by far Downs’ best players when they were attacking in the initial stanza. The duo constantly delivered crosses to the hard-working Shalulile in the box, but Belouizdad defenders Sofiane Bouchar and Chemseddine Nessakh used their height and strength to outfox the Namibian.

Denis Onyango was not tested until the 44th minute when Sayoud brilliantly looped him to level matters. The equaliser came against the run of play after Zwane passed the ball to Belouizdad’s player.

Downs played with more intent in the second half. Gaston Sirino and Zwane rekindled their combination that helped the league winners to dominate proceedings, scoring four goals in the second period. New signing Rushine de Reuck made his Downs debut, replacing Musa Lebusa later on.