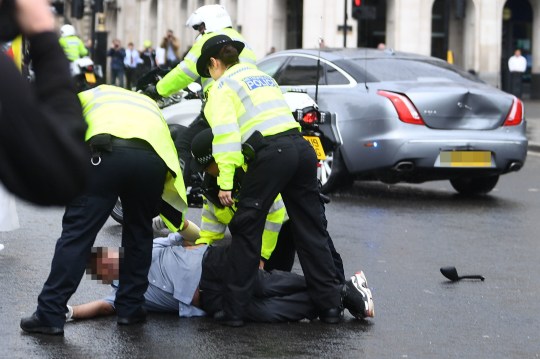 British Prime Minister, Boris Johnson escaped unhurt after getting involved in a minor car crash in Westminster after his vehicle was rear-ended by his security team.

It was gathered that the incident took place moments after a man protesting Turkey’s operation against Kurds in Iraq jumped out in front of his Jaguar, causing it to come to a sudden stop, Metro UK reported.

Footage then shows the security team’s Range Rover going into the back of the car and leaving a significant dent. Downing Street has now confirmed that Johnson was inside the car at the time, but said nobody was injured in the incident. The protester was then detained for running in front of the convoy, while the vehicles drove away from the scene within seconds of the crash.

A spokesperson said: ‘I think the video speaks for itself as to what happened. No reports of anybody being injured.’