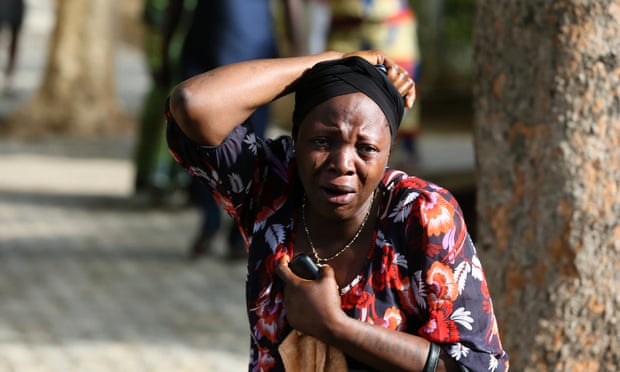 They are hired with White weapons in hand to destroy their Black tribesmen, and on autopilot mode, mentally rewired by white Arab religion.

Inch by inch as helpless Africans south of the Sahara loose ancestral lands to shadowy veiled hordes, we analyse the sinister and truly mystifying psychology of Black men; Negroid African males who overtly lend themselves to foreign forces pushing a repeat of same genocidal wipe-out that occurred to indigenous Blacks north of Africa, many moons ago!

With over 30,000 shocking human fatalities, 3 million displaced souls and the existence of entire tribes’ teetering on the brink of extinction, the Nilo- Saharan- traditionally pastoral peoples in north eastern Nigeria, along with their cousin clans adjoining the Sahel corridor borders of Chad, Cameroon and Niger- are slowly getting encircled.

Bokoharam a Jihadist armed group calculatingly birthed in 2002 and murderously activated on a national scale in 2009, abhors the presence of the white European religion and educational system, on the Nigeria soil. It’s solution to this Caucasian European malaise, is the total surgical removal of it by violently dislodging a horrifying sea of Black blood. And on its replacement, in their calculation, the far superior healing medication in form of the Caucasian Arab version of things. Not unless the conclusion was that the Negroid African recipients of these Caucasian religious medicamente were in coma, and on par with monkeys mentally; as to why a most crucial consultation was not held with the Black humans, remains a mystery

Allegedly to plant the fourteen hundred years old Arab religion on an African soil, but the irony is the naturally peaceful defenceless Black victims are actually their progenitors! The African homosapian sapien humans who bore them and have existed harmoniously with Nature, on same spot for millions of years are the ones demonically and savagely hunted for soul-saving with a foreign ideology

The Arab religion is believed to have filtered into the Chadian region in the year 1085 when the African ruler of then Kanem-Bornoe Empire, Umme-Jilmi accepted it on face value. Typical with the notorious naivety of Black male leaders then and now; extensive background checks were never carried out to ascertain pros and cons just to avert unforeseen doom befalling their kind. As par usual the inexplicable fascination and uncontrollable hunger to hastily dash to the domains of the foreign authors of the imported ideology overpowers common sense. Departing as an African King only to resurface back home to his now confused and appalled people as an enslaved King to a foreign ideology with the crucial and most unifying symbol, the “African” hyphenation, now dangerously missing in their titles! Now arabised, mentally altered and culturally compromised, it does not take a crystal ball peek into the future to foretell the doom that awaits African coming descendants

Before interfacing with foreign religious ideologies, African tribes for aeons were in dynamic and seamless contact with each other. The foreign contact suppressed and eventually altered the native African cultural terrain and terminally disrupted the ancient customary methods used in appropriating power. African Monarchs who were the most powerful beings walking their lands, had their unmistakeable African identity grounded. Completely pristine, and totally in sync with their overall traditions, with the resultant overall harmony on the land pulsating unperturbed! Doing the opposite, which is now the norm in Africa, has ushered in a tsunami of psycho-mental clashes! The age of African cultural decay and decline present itself to us now; exposing Black humans and lands to perpetual foreign incursions and devastation

Not too long ago, the first UNESCO world’s heritage site in Nigeria, SUKUR , a picturesque hilltop village settlement located in Adamawa state, was savagely destroyed by Bokohoram in Dec 12 2014. The mindboggling barbarism displayed in the gruesome killing of the harmless Black villagers and the sacrilegious desecration of their native shrines and burial sites parallels same genocidal attack visited on the same people just over 100 years ago when Jihadists bandits invaded!

The discovery of the private diary of  Hamman Yaji reveal blood chilling personal entries of recurrent incomprehensible savagery from a Black man towards other Black people, on same Black continent!

Aside from the horrific finds in his personal diary, eye witness accounts also states:

As with all the other unprovoked transgressions and plunderings then and now, the playbook dictates:

No place in the Arab world would one find Africans ideologically pushing, let alone grounding militias with a mind to maim and murder Caucasian Arabs for not adopting African names and religions. It is almost visually impossible to picture Africans, posturing like a destructive fifth column within a culture, pushing out other communities and setting up conditionalities demanding others commit self-erasure and cultural suicide to coexist else they get beheaded!

To exhibit this bizarre behaviour comes with intent. This move, a very conscious one at that, is politically motivated. The success of this, triggers the eventual death of the host community; as was inflicted upon the indigenous Blacks in North Africa.

That this terrifying trait seems absent in the African psyche, attest to a phenomenal level of civility anchoring on a spirituality and connectivity to Nature, seen nowhere else on earth. Indeed nothing else but this unique and unusual essence distinguishes and sets the Negroids apart

Clarity on the above may open the mind for comprehensive understanding, but how does one digest without diarrhoea the sights of same foreign traits wholly activated in Black male bodies?

How does one explain the sort of psychology possessed by these men? How on earth are these particular strains of Black men manufactured and in what petri dish?