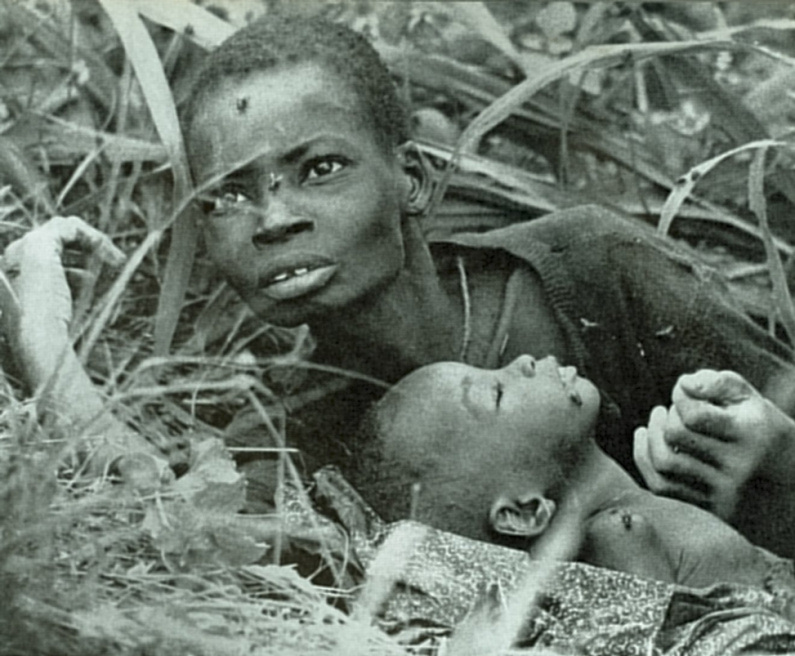 Biafran Genocide: Britain And Its Abominable Role In The Nigerian Civil War

Nigeria had experienced a string of political problems ever since the dawn of independence from the British in 1960, problems that almost rendered useless the independence struggle by their founding fathers.

The Nigerian census crisis of 1963–64 that had rocked the nation was one of them. The federal election crisis of 1964, the Western Nigeria electoral crisis of 1965 and other setbacks innumerable to mention added to the strain of the young country.

However, at the backdrop of these disorders was political corruption. Ethnic sentiments were endemic and a fierce power tussle between the Northern, Western and Eastern regions of Nigeria raged ceaselessly.

The political structure was in shambles; those in power were determined to stay put, looting the national treasury soon became a convenient pastime for shady politicians and the battle for ethnic superiority intensified.

All these abnormalities led a group of Nigerian soldiers- mostly of Igbo extraction from the Eastern part of the country- to plot a coup and usurp the democratic government, leading to the death of many politicians, especially from the Hausa North

A countercoup by Northern soldiers was executed and many Igbo soldiers and civilzians were killed, in what was known as “the Pogrom”. After several unsuccessful attempts at peace and reconciliation, the Eastern region announced its independence from Nigeria and war was declared in 1967.

Britain hurriedly took sides, supporting the Nigerian federal government against the breakaway Republic of Biafra. The popular narrative was that it was looking to maintain the “One Nigeria” nation they had created in 1914, under the supervision of Lugard, and avoid a breakaway along tribal lines. But there was more to it.

Britain, however, was more interested in the crude oil in Nigeria than they were in Nigeria’s unity. They had handed power to the Northern Hausa-Fulani upon their departure in 1960, but the crude oil was in the South. The Northerners were the closest ally of the British government and England had to find a way to help them recover the oil-rich South-Eastern region.

And so, when the Northern politicians and stastesmen reneged on their agreement in the Aburi Accord and war was declared, Britain, instead of reprimanding the Northern oligarchs and reconvening a peace talk, hurriedly jumped to the side of the Nigerian government dominated by the Muslim-North.

Everything Britain did in the Nigeria-Biafra war, they did based on political calculations as against morality. Top on the list was to protect Britain’s oil interest in Nigeria via their companies Shell and BP. And so, they took sides with the Nigerian government. The goal was to extract as much oil as they could from Nigeria to Britain, and a secession by the oil-rich Eastern region from the Muslim North (installed on the seat of power by Britain), did not bode well for Harold Wilson’s British government.

Britain, in its bid to protect its mercantile interest in Nigeria, provided an assortment of deadly weaponry to the Nigerian troops that led to destruction of millions of lives in the oil-rich Eastern region of Nigeria.

Harold Wilson’s British Labour government, realizing the position of Nigerian as having a clear military advantage in the conflict, backed Nigeria solely with the goal of quickly defeating the Biafran army. The Nigerian troops were fiurnished with thousands of mortar bombs, grenades, howitzer rounds, machine guns, bayonets, a couple of Saladin and Saracen armoured cars, Bofors, Oerlikon guns and millions of ammunition on a vast scale. Jet fighters and helicopters were also surreptitiously handed over to the Nigerian military troops by British government.

Among the fighter jets the British government sent to the Nigerian military were Czech L-29 Delfins, flown by Egyptian mercenary pilots. The pilots strafed both Biafran military personnel and civilians, leaving many casualties along the way.

The war lasted for 2 years, 6 months, 1 week and 2 days. After a hard fought war that led to the death of millions of Nigerians, mainly from the Eastern region, the surrender paper was signed on January 14, 1970 in Lagos, ending the war the day after

It is imperative to note that both sides had foreign support. Nigeria was majorly supported by Britain, the USA, Soviet Union, Bulgaria, Egypt, Syria, Algeria; while the breakaway Republic of Biafra was supported by France, Israel, Portugal, Spain, South Africa, Rhodesia, Tanzania. However, because there was abundance of incentives and ammunition available on the Nigerian side, none of their foreign mercenaries left. But all the foreign mercenaries deserted Biafra except some German land and air fighters.

All trading routes on land, sea and air were blocked by the Nigerian military, effectively stopping the Eastern region of Biafra from selling its oil. Rivers state, one of the major oil states in the then Eastern region was the first Biafran territory captured by the Nigerian army. With that success British Shell BP, resumed crude oil mining immediately.

The final military assault on the breakaway Republic of Biafra (Operation Tail-Wind) took place in the towns of Owerri (Imo state) and Uli (Anambra state) both of which would be subsequently captured by Nigerian forces.

The operation ended with General Odumegwu Ojukwu, the leader of the Biafran military contingent, fleeing into exile to the Ivory Coast and his deputy Philip Effiong, surrendering to General Olusegun Obasanjo. This part of the operation lasted 5 days -January 7 – 12, 1970.

About 3 million Africans perished in the Eastern region of Biafra. Children were worst hit with many dying from Kwashiokor, stray bullets, air raids, and bomb explosions.

The war has long ended, but its haunting karma remains