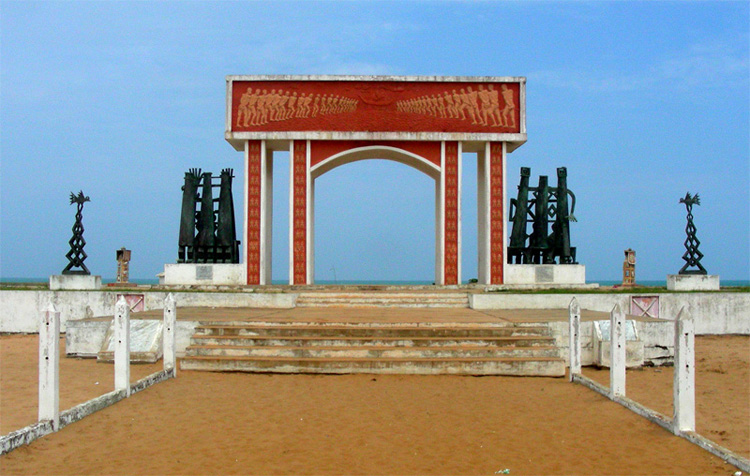 Benin, land of the former Kingdom of Dahomey, with its geographical fibres vibrating in cultural riches and history that spans thousands of years. Part of this past touches upon the Transatlantic Slave Trade of the 1600s that lasted around 300 years as Ouidah — the nation’s coastal town, was a main port from where many Africans were captured and inhumanely shipped abroad.

During the 17th and 18th centuries, European colonisers held more than one million African men, women and children in Ouidah’s Portuguese-claimed Fort before shipping them across the Atlantic in abominable conditions. In Benin, pillaged for the slave trade by Portugal, Britain and France, Africans were captured. Ouidah, about 40 kilometres (25 miles) from Benin’s economic hub today of Cotonou, was one of the main posts to the Americas, according to research at Yale University. The ports in Benin are comparable to slave ports in modern-day Ghana and the swathe of Central Africa that today encompasses Angola, the Republic of Congo and the Democratic Republic of Congo.

The locals are choosing to embrace this aspect of their national heritage in the wake of the Black Lives Matter movement – started in 2013 and revived in May 2020 after the murder of George Floyd at the hands of police in the United States, that sees many Africans and Afro Diaspora all over the globe taking down colonial symbols that hold painful memories of racial injustice.

Statues of colonial figures have been decapitated and names of diverse products — and even streets, have been changed across countries in Europe, the Americas and Africa in light of the recent global protests evoking the various disparities between the treatment and position of black people within various societies all over.

Eric Accrombessi, a Ouidah native and tour guide, explains the city’s stance, “Ouidah is the most marked city in the history of slavery, that’s why beyond the movements fighting for the cause of black people, we want the sites that have known this history to be restored so that history doesn’t die.”

This is as part of a bid to promote tourism as Benin presents an image of itself as a place of “cultural exception,” said Minister of Tourism Jean-Michel Abimbola, who stressed that the government has allocated a budget of one billion euros ($1.17 billion) toward that goal.

Authorities are renovating the Pendjari National Park in the far north to attract safari hunters, and building several museums of voodoo, an indigenous religion that originated in the Kingdom of Dahomey. Benin has also asked France to return objects looted in colonial conflicts.

Visitors can also see portable altars used in ceremonies by the long line of kings of former Dahomey, founded around 1600 and crushed by French colonialists in 1894. The museum houses a church bell brought by Roman Catholic missionaries, together with a sinister selection of chains and other implements used to bind slaves.

The renovation of Benin’s Ouidah Fort — which also houses a history museum, is a move to have future generations honour the suffering and celebrate the overcoming of African ancestors.