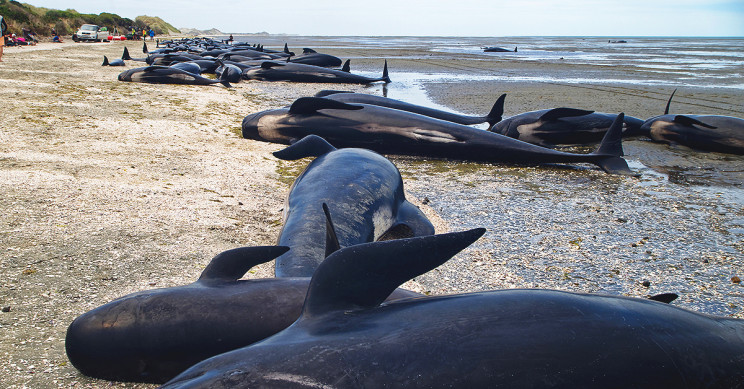 About 380 stranded pilot whales on the remote west coast of Tasmania were confirmed dead on Wednesday afternoon with rescuers fighting to save the remaining 30 that are still alive.

More than 450 long-finned pilot whales were caught on sandbanks and beaches inside Macquarie Harbour, with a rescue effort starting on Tuesday morning, The Guardian reports.

Rescuers were able to rescue 50 whales and coax them back to the open ocean.

Rescuers were focused on 270 whales stranded near the town of Strahan, but on Wednesday morning a further 200 whales about 10km away in the same harbour were discovered from a helicopter. Officials later confirmed all had died.

“From the air, they didn’t look to be in a condition that would warrant rescue,” said Deka, Tasmania Parks and Wildlife Service Manager. “Most of them appeared to be dead.”

“We’ll continue to work to free as many of the animals as we can,” he said. “We’ll continue working for as long as there are live animals,” he added.

Scientists have said the nearly 500 beached whales in Tasmania this week represents the largest mass-stranding ever recorded in Australia.

Australia’s previous largest mass stranding event was in 1996 and involved 320 pilot whales off the coast of Western Australia near the town of Dunsborough.

How were they stranded?

It is unclear what caused the hundreds of whales to run aground. The pod may have moved close to the coast to feed, or have followed one or two whales on a misadventure, marine biologist Kris Carlyon told a press conference Tuesday.

“It’s really likely this was one stranding event of a big group. This would have been one big group offshore,” he said

As the battle to rescue as many as are still alive continues, authorities are also considering how best to handle the growing number of carcasses.