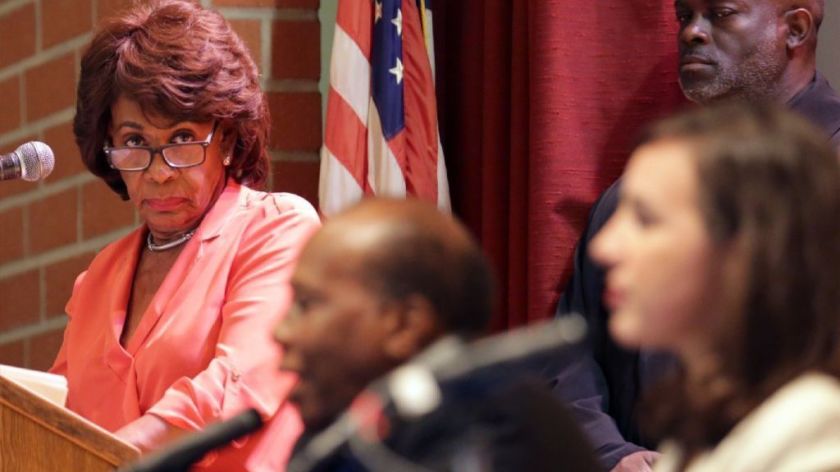 Auntie Maxine: Not New To This, She’s True To This: 5 Times U.S. Rep. Maxine Waters Took A Stand

Maxine Waters has been telling communities to demand better from their elected officials since she worked at a Head Start program in Watts in the 1960s. But after her Saturday appearance at a protest in Brooklyn Center, Minnesota, Waters has been called everything but a child of God.

On Monday during the Derek Chauvin murder trial, presiding Judge Peter Cahill argued that Waters’ statements during her Saturday appearance could be grounds for an appeal after denying the defense’s motion for a mistrial based on her commentary.

“I’ll give you that Congresswoman Waters may have given you something on appeal that may result in this whole trial being overturned,” said Cahill.

“This goes back to what I’ve been saying from the beginning,” he continued. “I wish elected officials would stop talking about this case, especially in a manner that is disrespectful to the rule of law and to the judicial branch and our function.”

Cahill’s angered rebuke added to the ongoing noise aimed at Waters taking the fall as a scapegoat after supporting the demonstrators.

The outrage and fake concern over her comments and decision to be present as “Auntie Maxine” is not surprising. Folks like Rep. Marjorie Taylor Greene, and other right-wing figures have called for her to be censured, making a spectacle of a brief moment of solidarity to distract from their issues.

People don’t have to agree with Waters’ statements or actions, but to claim she’s inciting violence is a logical leap deeply rooted in white supremacy and manipulation of facts.

Her comments are no different than those made by Democratic members of the Florida legislature who spoke out against Gov. Ron DeSantis signing an anti-protest bill into law on Monday. Several promised to continue showing up in the streets and demanded that people take to the streets to fight back against injustice.

The issue isn’t why Waters, 82, would go to a protest against police killings and make a statement about folks needing to be out in the streets demanding justice. The real question is, why are more people content with being silent? She has endured attacks and threats during her tenure, and still, she persists.

During the L.A. Uprising, Maxine Waters took aim at years of political oppression and instability

Waters’ comments Saturday night were no different than those she made nearly 30 years ago during the L.A. uprising. Waters doesn’t placate or bite her tongue.

Pressed to denounce the uprising, Waters used media attention to shift focus onto the conditions in communities within her district.

“We had to go beyond people thinking that the video (of King being beaten by police) created all of this frustration. (The problem) has been simmering because of a lack of attention to these inner cities for so long. The hopelessness, the unemployment, the frustration has been festering. The jury verdict was just the straw that broke the camel’s back,” said Waters.

Black communities and other traditionally ignored groups are fighting for their lives. Waters wanted to center people’s real lives and experiences. When former President George H.W. Bush convened a meeting to discuss the next steps after the uprising, Waters was not invited. She showed up anyway because it was her district, and her voice would be heard.

About three months after NYPD officers fired 41 shots killing 23-year-old Amadou Diallo, House Democrats introduced a study of police brutality. Waters spoke against the study, basically calling it useless. She advocated for increased penalties for officers who deprive people of their civil rights and lives.

At the time, the ACLU released a statement calling the study a symbol instead of substance.  “Faced with solid evidence of police misconduct across the nation, all the federal government is offering is yet another foil,” said Rachel King, ACLU legislative counsel. “This is a blatant attempt to sidestep its obligation to provide leadership and enforce already existing laws.

Calling out the brutal beating of Black Inglewood teen in 2002

In an interview with Democracy Now, Waters spoke out about ongoing police abuse and profiling in the wake of the brutal beating of 16-year-old Donovan Jackson-Chavis in 2002. Donovan and his father were stopped by two white Los Angeles County sheriff’s deputies at a gas station for expired tags. A nearby bystander captured the incident on video. The deputies beat Donovan after being handcuffed.

Waters indicates that information made available at the time suggested Donovan was in special education and had a hearing impairment. “I suppose many of us thought that at least the police in the greater Los Angeles area had learned a lesson from Rodney King,” Water told Democracy Now, reflecting on the 10 years since the brutal beating. She continued to say she thought police would’ve learned to make arrests without brutality. Waters continued to say she thought police would have stopped realizing they would be at the center of a negative community response.

Taking on Jeff Sessions’ obstruction of police investigations at the DOJ

Waters spoke with Mic in 2017 to discuss legislation that would have required the Justice Department to take action to address police abuse and violence. She also proposed legislation to undo mandatory minimums for drug-related offenses.

During his tenure at Attorney General, Sessions rolled back enforcement actions in the Civil Rights Division. Attorney General Merrick Garland recently restored guidelines for taking action against individual police officers and the use of consent decrees.

“You know, you’re not supposed to say you’re angry,” Waters said during the interview. “But I am. I don’t like it. I just think it’s abuse of power. It is abusive [for Sessions] to come in and try and undo what we have worked so hard for: to bring about justice and fairness.”

Stopped alongside a Black man detained by to ensure his safety

In July 2020, Auntie Maxine made headlines again when she observed police detaining a Black man on the side of the road. She did what any good auntie would do; she stopped and watched to make sure he went on safely.

Revolt TV highlighted the clip, noting the incident came almost two months after George Floyd was killed in Minneapolis and the nation erupted into protests.

“They say I’m in the wrong place and they’re gonna give me a ticket,” she says in the video. “I said, that’s ok as long as I can watch them.”

Nearly 30 years after Rodney King, Waters wanted to make sure the officers handled things the right way. Earlier that month, Waters renewed her call for law enforcement to ban chokeholds or any practice that uses a body part or piece of equipment to cut off a person’s breathing.