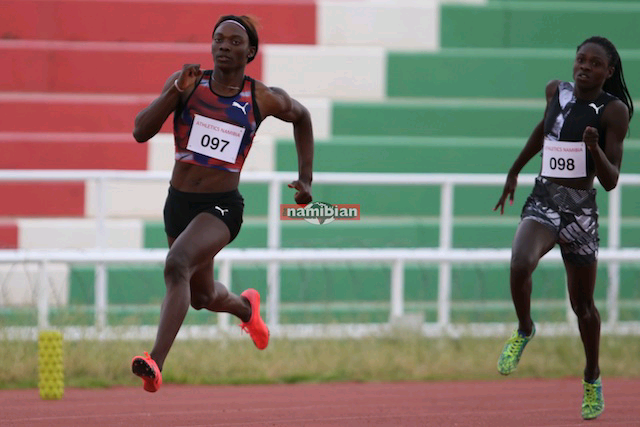 Athletics: Namibian Track Queens Mboma, Masilingi Lit Up The Track With some Brilliant Performances In Prague

Namibia’s sprint stars Christine Mboma and Beatrice Masilingi on Monday took their dominant display to the European athletics circuit, where they won gold and bronze medals, respectively, at the Josef Odlozil Memorial in Prague, Czech Republic.

The 18-year-old Mboma powered from middle of the bunch, accelerating with tremendous speed past compatriot Masilingi and Gambia’s Gina Bass to end first in the 200m race in a remarkable time of 22.67 seconds.

Not only did she scoop gold, but her winning time of 22.67 seconds became the new meeting record, crashing the previous record time of 22.74 seconds set by America’s Stephanie Durst in 2007.

Masilingi, also 18, equally managed to secure herself a spot on the podium when she finished third to take bronze with her impressive time of 22.82. Bass crossed the line in 22.76 seconds and took the silver medal.

As Mboma and Masilingi’s preparations for this year’s Tokyo Olympics remain well on course as impressively evidenced on Monday, their coach Henk Botha told New Era Sport yesterday they refuse to rest on their laurels, saying the two young sprinters can still achieve and do more.

“It was a great performance in Prague. Although that wasn’t the best performance of the girls, I am sure they will improve in their next competition, which we will soon announce,” he said.

Botha added that they are still waiting for final confirmation about their participation in the upcoming Diamond League in Rome, but there are other upcoming competitions on the European circuit that they are eyeing to compete in.

“The competition in Rome is not yet confirmed but there is a possibility that we will compete again on the 9th and 12th of this month at upcoming competitions here in Europe. We are on our way back to Rome now – but soon, we will partake in other competitions as well.”