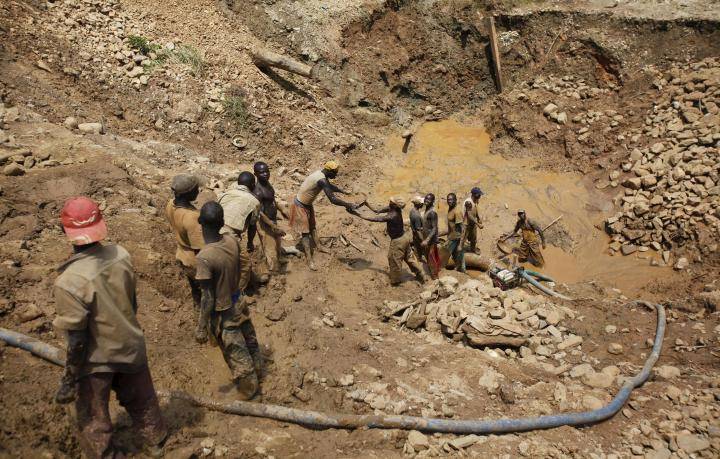 A gold mine near Kamituga in the east of the Democratic Republic of Congo collapsed on Friday afternoon, killing at least 50 people, a local mining NGO said.

The landslide was reportedly triggered by days of heavy rains in the South Kivu region near to the mines, which caused the cave-in.

Every year dozens of people die similar accidents in largely unregulated artisanal mines in the DRC, where often ill-equipped Black workers dig for globally sought-after raw materials such as gold, copper and cobalt.

‘Several miners were in the shaft which was covered and no one could get out. We are talking about 50 young people,’ Itongwa said.

Photos and videos have been released on social media and hundreds of people were gathered at the site, some of whom could be heard wailing on a hillside around the mine-shaft entrance.

Thousands of informal miners operate in and around mines in DRC, which produces more than half of the world’s cobalt, a key component in electric car batteries.

A landslide at a disused gold mine killed 16 in October last year, while 43 illegal miners died in another landslide at a copper and cobalt mine in June 2019.

The troubling reality is that most of these miners are ill-equipped and educated on safety measures by their government and giant multinational companies who hire their services on the cheap.

Experts and observers are calling for immediate reforms in the mining industry of the DRC.