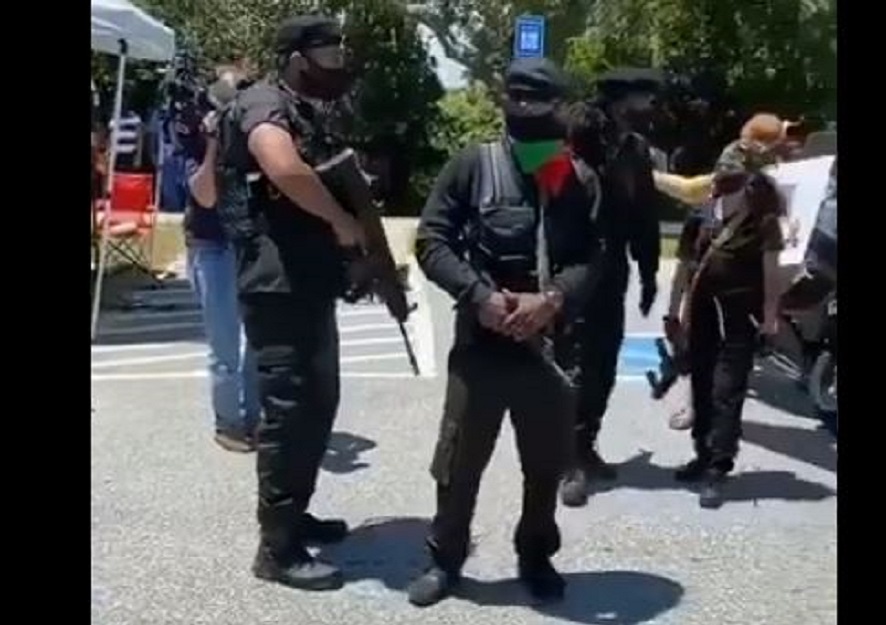 A group of legally armed black men were on Monday spotted patroling the neighborhood near Brunswick, Georgia, where Ahmaud Arbery was shot and killed in February.

According to local reports, the armed men believed to be members of the Black Panthers Party came out to protest in the Satilla Shores neighborhood where the McMichaels are accused of murdering 25-year-old Arbery who was reportedly jogging in the area.

Reports say the legally armed black men patrolling the area where Arbery was killed were joined by members of a black motorcycle club, who were also protesting the young man’s death.

Satilla Shores, which is reported to be a very white and conservative neighborhood in Glynn County, Georgia, has remained largely under the radar before Arbery’s killing, according to officials. And of course, residents wouldn’t want to see demonstrators with machine guns on their streets. One of the demonstrators who was wearing a camouflage bulletproof vest dared any resident to walk up to them and ask them to leave.

“You think they would have shot me if I was running through they goddamn neighborhood?” the man asked. “Well I’mma give them an opportunity,” he was quoted in a report by NewsOne.

In Georgia, gun laws allow licensed gun owners to openly carry their weapons “even if there is no apparent cause for self-defense,” the report added.

Last Thursday, the two men involved in the fatal shooting of Arbery, Gregory and Travis McMichael, were arrested on charges of murder and aggravated assault. The two were detained at the Glynn County jail.

Earlier in the week, Georgia prosecutor, Tom Durden, released a statement saying he will present a case to a grand jury in Glynn County to consider charges against the McMichaels. Parts of Gregory McMichael’s statement to the police seems to tally with the video that was leaked online this week.

Arbery was killed on February 23 while reportedly jogging. The older McMichael had told officers that they had chased Arbery after he thought Arbery looked like a suspect who had been connected to a number of burglaries in the Brunswick area.

When the father and son caught up with Arbery, the deceased struggled with Travis over the shotgun the younger McMichael was holding. Two shots were fired at Arbery during the scuffle before he fell down on the road.

In an interview with CNN, Arbery’s mother, Wanda Cooper, said she was told by police in February that her son had been killed in a struggle over a gun with the son of the homeowner whose house Arbery had burglarized.