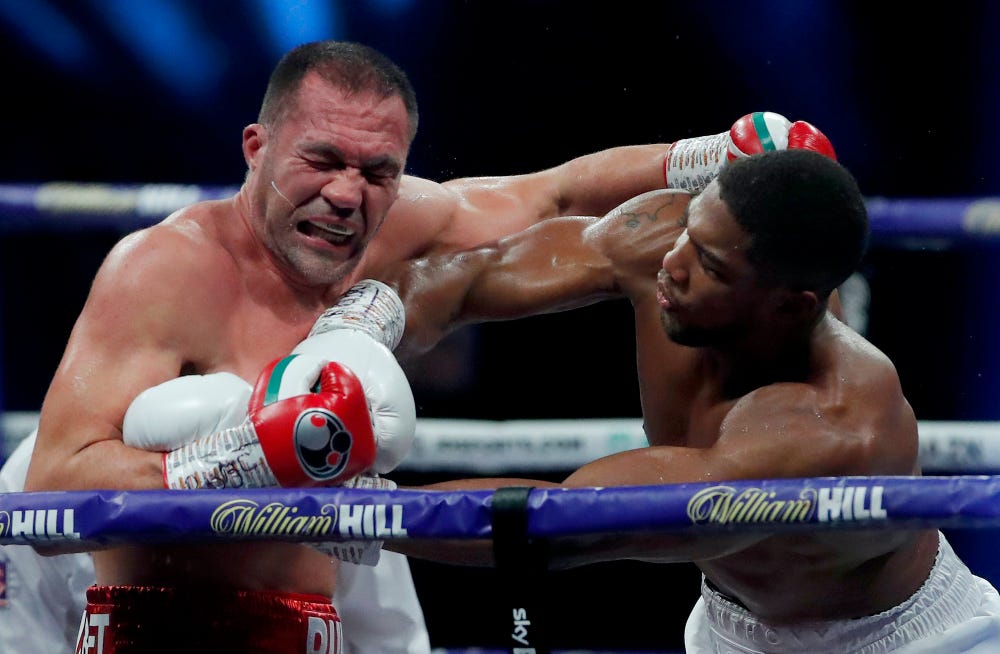 Anthony Joshua vs Pulev: AJ KOs The Bulgarian With The Weight Of A Fury Bout On His Shoulders!

After knocking out Kubrat Pulev to retain his bundle of heavyweight titles on Saturday, Anthony Joshua was more interested in wishing the crowd of 1,000 fans inside the Wembley Arena in London a Merry Christmas than he was in discussing his performance, or anything to come. After a full year out of the ring doing little other than fielding questions, he had finally grown tired of it.

During post-fight interviews with both Sky Sports and DAZN, Joshua wasn’t dismissive in the manner boxers normally are. He remained polite and eloquent, but his gaze kept travelling to the small crowd, waving and making small talk in between queries. This wasn’t a man avoiding accountability. He was one who wasn’t sure how many more ways he could creatively answer the same questions.

Under normal circumstances, Joshua would have been addressing about 89,000 more people following a bout, but such was the hand he’d been dealt along with everyone else in 2020. His drawing power might make him the face of boxing at the moment, though an argument could be made for one or two others based on how one defines that phrase. But few fighters in the world carry the responsibility that Joshua seems to bear.

During the buildup to the fight, and particularly the night of, Joshua both presented himself and was addressed by others as the ambassador for the sport in the United Kingdom, and its humanitarian representative on the global stage. Even before he stepped through the entranceway into the arena, rather than a hype video chronicling his greatest hits, there was instead a black and white video message from Joshua welcoming fans back to live boxing and expressing sympathy for their plight in the pandemic year.

At once, Joshua has to shoulder the responsibility for the success of Matchroom Sport, DAZN and UK boxing as a whole. In doing so, he has to provide hope for a future Tyson Fury fight, promise an upset loss to the likes of Andy Ruiz will never happen again, and also do his best to further discourse around social justice within boxing.

It must be difficult for him to handle it all, to feel the pressure to guarantee things that aren’t entirely in his control (like fighting Fury) or even to focus on any one of his tasks when the weight of them is so immense.

Thankfully, he had the perfect opponent in front of him on Saturday night to keep him focused. Pulev, a professional troll both outside and inside the ring, pestered Joshua throughout fight week and continued to irritate the champion once the bell rung, all while standing directly in front of him waiting to absorb vicious shots.

Much of the tactical discourse leading up to the bout centered on the question of whether we would see the “pre-Ruiz” Joshua—meaning, an aggressive finisher– or the “Saudi Arabia” version of Joshua—meaning, a cautious jab artist. It was an oversimplified binary proposition that also suggested Joshua was a man who had been changed for the worse and not simply a fighter who evolved fundamentally. Even in Joshua’s streak of knockout wins leading up to his loss to Ruiz, he was never a forehead first brawler hell bent on getting a knockout as quickly as possible. His foundation was always built on solid long-range fighting, furnished with an exceptional uppercut on the inside and decorated with an ability to close the show.

Against Ruiz in New York City, Joshua found out that a short, quick-handed fighter could be very dangerous to him on the inside. No matter how potent his uppercut was when it landed, it might not get there in time. When they fought a second time, he spent 93% of the fight at distance and three quarters of his punches were jabs, according to CompuBox (just 10% more in relation to his total arsenal than he threw against Pulev). Rightfully so, as he was fighting a man he could not hurt on that night, and had serious questions about beating on the inside, but one who couldn’t reach him from range. In baseball terms, he was given an intentional walk, and was then criticized for not trying to hit a pitch-out over the right field fence.

In Pulev, he faced a man he could hurt once again, nearly ending the fight in the third round with a counter right hand and an uppercut, respectively. The moment it happened, the “pre-Ruiz” version of him came back—or rather, showed it was never gone at all. Suddenly his eyes were wide open, taunting, moving in the playfully loose nature of the 70s and 80s era heavyweights he loves to study. In round three, he threw more power shots in a round than he has since 2015 against Kevin Johnson.

And yet, with every passing second that Pulev wasn’t unconscious on the mat, questions flooded in on the timeline about whether the “demons” of June 2019 were haunting him and giving him pause. Those assessments of course ignored the fact that he was hoisting Pulev’s head back repeatedly with the very same uppercut that helped send Wladmimir Klitschko into retirement and Joshua into the boxing stratosphere just a few years ago.

Once a right hand pinned Pulev to the canvas for the count of ten, Joshua took a bow towards the sides of the arena housing fans, and then immediately left the ring to greet Mayweather. There were no microphones nearby, but one has to wonder if Joshua simply needed to chat with one of the only boxers alive who knows how his level of pressure feels and ask “how do you deal with all of this?”

One thing is certain, based on what we have heard when microphones were present on Saturday: Anthony Joshua is tired of promising. Now, he just wants to deliver.