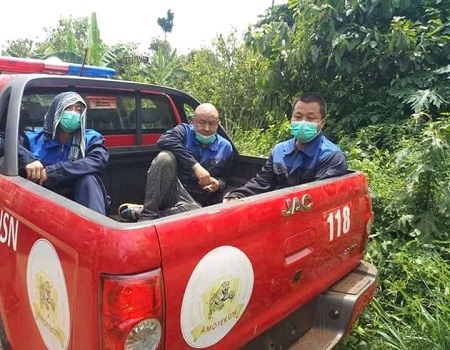 Nine Chinese, one Ghanaian, and three locals have been apprehended by Amotekun Security Corps in Osun.

Information gathered by Tribune Online revealed that they were said to have been arrested at four different illegal mining sites during operations carried out by Amotekun corps in collaboration with the State Joint Task Force (JTF).

The illegal sites were located at Itagunmodi, Igun and Ariye 1&2, all in Atakunmosa West local government area of the state.

The operation that lasted two hours was carried out following a tip-off from members of the public.

Confirming the arrest of the expatriates to our correspondent in Osogbo on Tuesday, the Director-General of Amotekun Security Corps in Osun, Comrade Amitolu Shittu maintained that the security outfit would not relent in its efforts to rid the state of illegal miners.

He added that the development was part of the resolve of Governor Gboyega Oyetola to drive out economic saboteurs, whose activities were inimical to the socio-economic growth of the state.
Shittu, however, commended the JTF comprising Nigerian Army, Air force, Navy, Police, DSS, NSCDC and Immigration for their cooperation with Amotekun corps to make the operation a success.

It would be recalled that a similar operation was carried out earlier this month by Amotekun Osun in collaboration with the JTF leading to the arrest of 27 illegal miners then, including 17 Chinese, 10 locals.